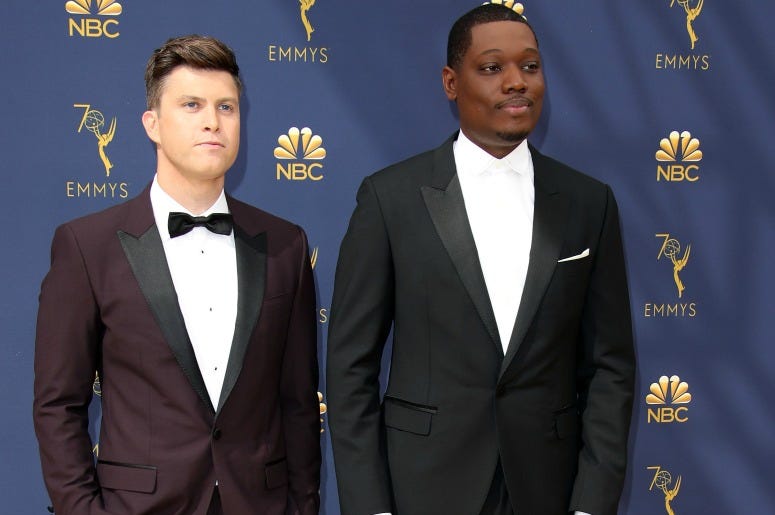 For the 70th time, the Television Academy binged way more TV than all of us and gave away a few awards on Monday night.

The 2018 Emmy Awards began as Kate McKinnon and Keenan Thompson kicked off the evening with a star-studded salute to diversity.

The song and sarcasm featured Andy Samberg, Tituss Burgess, and RuPaul. It was the first of many SNL-fueled moments throughout the evening hosted by the shows writers Colin Jost and Michael Che. It was also a song about diversity before an hour-plus of white winners.

The awards began in the comedy category, with the first going to the legendary Henry Winkler. Despite several nominations, this was Winkler's first win. In an emotional moment, The Fonz finally got to give his victory speech.

#Barry's Henry Winkler has won his first-ever #Emmys award. He has received six nominations over the past 42 years pic.twitter.com/wwz5jAGkKQ

Cheers to our very own #MrsMaisel! @RachelBros has won an Emmy for Outstanding Lead Actress in a Comedy Series. #Emmys pic.twitter.com/6aPth6JJfr

Betty White delivered the most unexpected cameo, and one of the sweetest moment of the evening. The actress was welcomed to the stage between awards for a brief thank you and a few stories about her legacy in TV. As the Emmys celebrate 70 years, it seemed more important to honor the 96-year-old legend.

Betty White is here and she is perfect #Emmys pic.twitter.com/c7aaKvdkn6

"Little did I dream then that I would be here, and it's incredible that I'm still in this business, and you are still putting up with me." - Betty White #Emmys pic.twitter.com/TF5L9QsVmi

As sweet as it was seeing Betty White, it nearly as amazing to see Glenn Weiss. What's a Glenn Weiss you say? He's the guy that won an Emmy for Directing of a Variety Special and turned his acceptance speech into a wedding proposal. Before he could even get the words out, the crowd had popped the question for him.

John Mulaney, Darren Criss, and Regina King all took home Emmys before the show got to the dragons, and robots, and drama.

More surprising maybe is Matthew Rhys win for his role in The Americans. The show ended after six seasons in May.

Claire Foy won the Outstanding Lead Actress in a Drama Series for The Crown after her second nomination for the role.

Claire Foy says goodbye to #TheCrown and welcomes the new cast in #Emmys acceptance speech: "I dedicate this to the next cast, the next generation." pic.twitter.com/PKEsqrn6zu

RuPaul's Drag Race, Saturday Night Live, Last Week Tonight with John Oliver, and The Assassination of Gianni Versace: American Crime Story all won in thier respective categories before the night's final two big awards. In the end it was The Marvelous Mrs. Maisel who took home home Outstanding Comedy Series, and Game Of Thrones who landed the prize for Outstanding Drama Series.

It was an uneven evening for the Emmys, but the end of another chapter of amazing TV all the same. You can find the full list of winners below, right underneath this pretty fitting collection of dad jokes. That feels about right.

Outstanding Writing For A Comedy Series
The Marvelous Mrs. Maisel

Outstanding Directing For A Comedy Series
The Marvelous Mrs. Maisel

Outstanding Directing For A Variety Special
The Oscars

Outstanding Writing For A Drama Series
The Americans ​

Outstanding Directing For A Drama Series
The Crown