The waiting is the hardest part, but Taylor Swift certainly kept us occupied on the way to her new single "ME!"

As zeros hit across the board, the result is a literal rainbow after the darker hues of Reputation. "ME!" showcases the sunniest side of Swift, marching towards individuality and sparkling with positive empowerment. She's not alone, with Brendon Urie of Panic! At The Disco playing her counterpart, going stride for stride with Taylor as they race towards the brightness. Together they combine for a warm and wonderful dose of sweetness.

There's a breadcrumb trail of teases that led to "ME!" Speculation first began with a photo of seven palm trees Swift posted weeks ago, with fans ready to read into every inch that it was a sign for an upcoming seventh studio album. It continued through a string of pastel photos and passing hints, down to a countdown clock that launched a lucky 13 days from the release.

The anticipation hit a fever pitch on Thursday, as a Kelsey Montague mural near the artist's famed Wings work in Nashville appeared, packed with color and clues and eventually the title of her new song. Buried in the butterfly wings were 13 hearts, 7 stars, and a cat cameo or two or three. 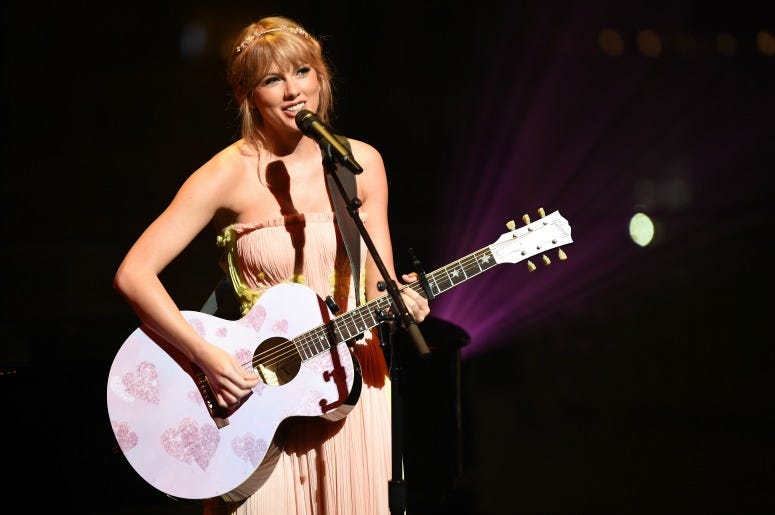 Swift made her way to the site around noon, and took pictures with fans and further stoked the fire. Later she would appear during the NFL Draft to drop even more info about the new release, revealing the title and the collaboration.

"ME!" is the first new song from Swift since Reputation debuted in November of 2017. It followed with a top-grossing stadium tour and a Netflix documentary. She is nominated for two awards at next week's Billboard Music Awards, of which she has won more of than any other artist ever.

"ME!" by Taylor Swift featuring Brendon Urie of Panic! At The Disco is a RADIO.COM WORLD PREMIERE. That means you can hear the song all day long on your favorite RADIO.COM Pop station, in celebration of the new release.