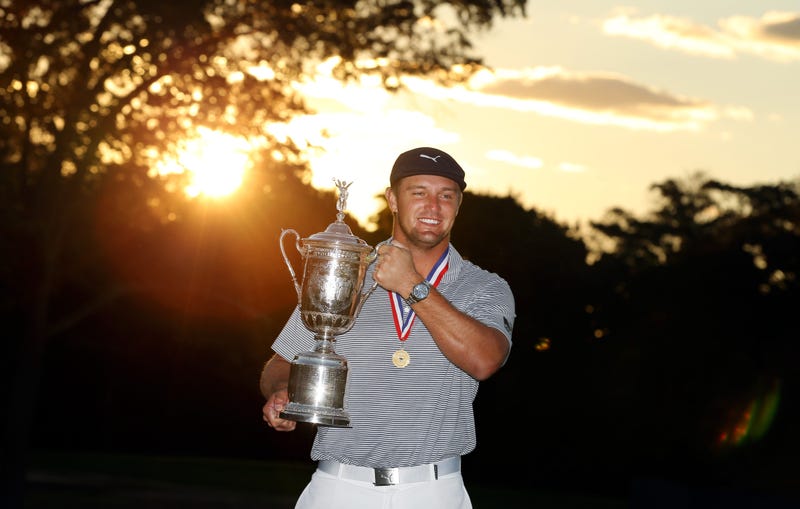 Spoiler alert: golf is maddening. The endless search for a consistent, efficient swing is elusive for most, mind-numbingly frustrating for all. It's a life-long pursuit, a pursuit that usually fails to deliver the desired results. At least consistently. Enter Bryson DeChambeau, who over the course of four days at Winged Foot, a fabled and treacherous and historically unrelenting track, stared the mischievous sport eyeball-to-eyeball, and won.

Of course, that victory was illuminated by the hoisting of one of America's grandest trophies. And a fat pay check. That's the tangible stuff. But it's the other stuff, the stuff far tougher to quantify that has already propelled DeChambeau into a space few thought he could reach, a tier that will force the next generation of golfers to completely overhaul their approach. They see the path, and now they, too, will look to propel themselves into the winner's circle by attacking the game in the most unconventional way imaginable: through pure girth, science and math, a trifecta DeChambeau latched onto five months ago, with a grasp that is now emboldened by his success on one of the most difficult stages in all of golf.

Listen, golf is no different than all of the other sports. It's constantly evolving, or at least it has been since Tiger Woods burst on the scene. Once Woods' force was unleashed on the rest of the unsuspecting Tour, eventually, the boring khakis and tight, plain shirts with visible love handles was replaced with dark, bold colors and designs and bodies that look like tight ends or safeties. Everything changed. Woods' brilliance set off a sudden chain reaction of fitness, and while it took a few years before it fully hit the Tour, it's everywhere now. Koepka. DJ. Rory. All jacked. Jon Rahm. Massive. Even Phil tightened up and dropped a pants size while adding to the guns show. The pursuit of power changed the entire complexion of the sport. Why go around an obstacle if I can go right over it, while reducing the distance from point A to point B? If there's truly no penalty, and subsequently, no legitimate reward for consistently finding fairways, air-mailing trees and cutting corners became the new 3-point shot or launch angle. And it works.

Watching DeChambeau exhale like a power lifter, expertly aligning his lungs with his core muscles in the pursuit of 140-plus mile-per-hour swing speeds and 200-plus mile-per-hour ball speeds is absolutely incredible to witness. And yes, if one human can do that, eventually others will follow. But the entire scene is what paints him so uniquely, a mad scientist marrying numbers and removing doubt from the equation, chugging power drinks and packing on calories as he hunts his next vicious swipe. A bit of a temper. It all adds up to golf's biggest nightmare, because there's not a damn thing they can do about it, even though everyone with a pair of penny loafers and good scotch continues to whisper, "This isn't how the game was designed to be played."

Well, you're right. So accept it for what it is, the next phase of human evolution and ingenuity, and fight back. Clearly there are only so many options, and lengthening courses simply is not feasible. Most of the professional venues are already stretched to the limits, approaching 8,000 yards. There's simply not enough land to change the layouts of courses from tee to green, unless of course you fail to find fairways. Ahhh, the good 'ol short stuff. The long, gratifying walk after connecting off the tee, long and straight, while the rest of your group admires the bomb. Position A. Clean lie. No impediments. If you're good enough to regularly find fairways, then dammit, you deserve to score well, provided the other aspects of your game are tight enough to capitalize. But for the growing number of cavalier, bomb-seeking maniacs on Tour, errant shots must simply be treated much more punitively.

The rough at Winged Foot was 5". Perhaps, that becomes more standard for non-majors and for majors, the rough creeps up to the 7-8' inch range. Why not? It will force everyone, perhaps even DeChambeau, to have a fluid strategy. He repeatedly cleared his way from the rough with short irons like Darth Vader's lightsaber effortlessly piercing Obi Wan's robe. Like it wasn't even there. As incredible as the performance was, that has a short shelf life. Eventually, we will become desensitized to 375-yard tee shots, much like the way we quickly became desensitized to 300-yard drives. It's already happening.

Here's the one catch. While the pursuit of distance and power is galvanizing, it will also be detrimental to most of the players already on Tour. It's not normal, not natural. Physically and mentally. It's counter-intuitive to what they's been taught their entire life. In essence, they are abandoning one philosophy, the only one they know, for a foreign philosophy that may or may not agree with their bodies and minds. When you accelerate to DeChambeau's speeds, the results could be fatal. Imagine crashing at 65 miles per hour. Scary stuff, for sure.

Now imagine crashing at 100 mph. It's a different jolt, a foreign force. It's one thing for me to experiment with something on the range and then try to implement it on the course, but my results are insignificant. No one's watching. There are no cameras. No microphones. No post-round interviews. No threat of failing to keep my card and,as a result, my earnings  power. Or keeping sponsors happy.

On Tour, it's different. When you lose your swing, it's a lonely world. Just ask Jordan Spieth. You don't just grab another beer and laugh it off. You melt. You implode. You search. And oftentimes, you sink deeper into the abyss.

Sure, it must be a blast playing the way DeChambeau plays. He's managed to expertly navigate a cliff with no net. While many will try, the collisions and implosions will be epic. All for the pursuit of 10-15 yards.

Is it really worth it?

Brandon Tierney is the co-host of CBS Sports Radio’s “Tiki & Tierney," which airs weekdays from 3-6 p.m. ET. Follow him on Twitter @BrandonTierney.