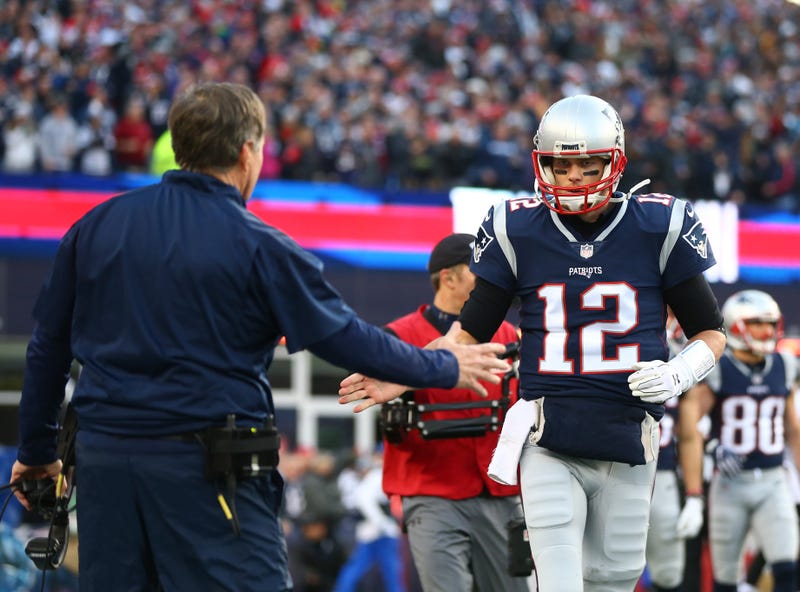 There were all kinds of rumblings that New England Patriots head coach Bill Belichick wanted Jimmy Garoppolo leading the charge at quarterback four seasons ago and NOT Tom Brady. This was even while Brady was winning league MVP. You know what Garoppolo has done in four years since leaving New England? He has had two winning seasons. Brady has now been a starting quarterback in the NFL for the last 20 years. IN EVERY single one of those seasons, he has finished with a winning record. In the three full seasons since leaving New England, Jimmy G has won 19 times, Brady has won 35. Jimmy G is averaging six wins per season, while Brady is averaging 12!

It is widely known to those who cover the Patriots that sufficient praise did not come out of Belichick’s mouth whenever he referenced Brady. Here’s what he had to say about new Patriots starting quarterback Cam Newton as recently as three months ago. “He’s come in and done everything we’ve asked him to do. He works hard. He’s obviously a very talented player and looking forward to continue to work with him.” Belichick knew that Newton would be his saving grace in the Brady vs. Belichick conversation of who is most responsible for those six Super Bowls. Newton’s potential (hopeful) success would silent those who doubted whether Belichick could win without Brady.

I can’t even remember a time when Belichick heaped praise like that on Brady. It seems surreal considering that Brady has 30 career playoff wins while Newton has just three. Brady has six Super Bowl wins – the most by any player in NFL History. Cam has zero. This week it was the 31-year old Newton who was asked multiple times about retirement while there have been no such questions for the 43-year-old Brady.

As a result of Brady leaving the Patriots this season, they have already lost eight games – their most in the last 20 years. They STILL have two games to go to add to those losses. In 2000, despite Brady being on the roster, it was another quarterback in Drew Bledsoe who was at the helm for the Patriots. They ended up going 5-11 that season. Then Brady started for the next 20 years, and you know what Belichick got out of it? TWENTY straight winning seasons. It looks like after 20 consecutive years of a winning record, Belichick will have his second losing record as the head coach of the Patriots. Brady, unlike 2000, is not waiting in the wings to show up and save him.

To dive a little deeper into how much Belichick won with Brady, he had a record of 249-75. That is a 77% winning percentage. That is an average of over 12 wins per season. Belichick has a pedestrian 24-27 record with the Patriots when he doesn’t have Brady at quarterback. Belichick wins 77% of his games with Brady and is under .500 without him New England.

I wonder if Belichick wishes he would have gone about things differently with Brady. He would criticize and often treat Brady like he would any other player. It didn’t matter if it was Brady or a player on the practice squad; they would get chewed out equally. In my opinion, Belichick let it be known that he wanted to move on from Brady in many instances. Phil Jackson rode it out with Michael Jordan, Gregg Popovich with Tim Duncan, Joe Girardi with Derek Jeter. Belichick clearly took a different approach, Brady felt under-appreciated and the inevitable split occurred. Here’s what happened…

Brady became the starting quarterback for the Tampa Bay Buccaneers. They are very likely to make their first playoff appearance in 13 years. As far the AFC East, the Bills clinched their first division title since 1995. The reigning NFL MVP Lamar Jackson wasn’t even born yet. Egos often get in the way of two major successes finishing it out together. This extends way beyond sports. What can’t be extended at this point is who was more responsible for the Patriots’ dynasty. It’s overwhelmingly showing up as Brady. The Brady or Belichick debate can be put to bed!