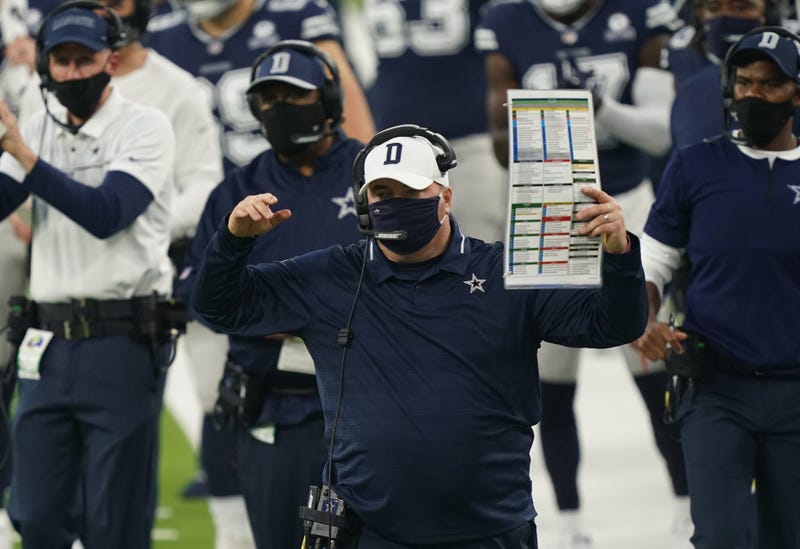 I cannot believe the rats are jumping off the ship in Dallas after just six weeks when it comes to Mike McCarthy. For players to go to Jane Slater and say things like the coaches have no idea what they are doing – knowing those comments would go public – is remarkable. Jason Garrett was not a good head coach in terms of getting over the hump and an offense going stale. But Jason Garrett kept the locker room together; Mike McCarthy already cannot.

The Cowboys are in trouble, Andy Dalton looks lost, and the defense – led by Mike Nolan – doesn’t have a clue. But they should still win the NFC East. If they cannot win the division, where six wins may get it done, McCarthy could be out already. Jerry Jones doesn’t like being a punchline, and Mike McCarthy and Mike Nolan are in the process of making him that.

I do think being a head coach in a new spot was a major disadvantage this year. No in-person meetings until training camp began, no preseason to implement your style, and now the Cowboys are the latest to show this being a problem. Heck, the NFC East has three of these situations. That cannot be coincidence. Patience should be preached by McCarthy, and he deserves that as a Super Bowl-winning head coach. The lights, though, shine brighter in Dallas, and the mockery that this is becoming may not allow for that patience.

1-The decision to go to Tua as the Fins sit at 3-3 certainly created a firestorm of debate. The Giants were 5-4 in 2004, in a playoff hunt, when they benched Kurt Warner for Eli Manning. It ended up being genius. Brian Flores also has to be considering being tricked. Ryan Fitzpatrick always turns into a pumpkin when his team has playoff hopes in the second half of a season. Get ahead of that now if you feel Tua is ready, and stay the course for the future – not just 2020.

2-The Patriots are who we thought they were. They have a poor roster that will win games because Cam Newton turns back the clock and Bill Belichick is a genius. They will lose games because outside of those two components, they are a bottom-five roster in the NFL. The Broncos did not need to score a touchdown to beat New England. Start finding that panic button.

3-If the Bills can’t lean on their defense, then what are they in reality? Josh Allen can look brilliant, but he will always make you pull out your hair. He is never going to be consistently great, and you can deal with that as long as the defense packs their punch. However, the Bills got run over two weeks in a row against elite AFC teams – the Titans and Chiefs – to the tune of over 200 yards. Are they going to be a mere placeholder in the AFC playoffs with no chance at making a run through good teams? It sure looks that way.

4-Good for the Saints winning the fight against their mayor to have fans in the Superdome. The threat to play at LSU was real. Wherever you stand on social gatherings, or political agendas, is irrelevant to the following simple football point: Nobody has missed having fans behind them at home more than the Saints. Of course we want all fans to be safe, and we haven’t heard of spikes caused by fans attending other NFL games. The Saints will benefit greatly from this, and some fans should have a chance to say goodbye to Drew Brees down the stretch.

5-The Jets should not fire Adam Gase at this point. A coaching change and having a coordinator like Gregg Williams coach the team the rest of the year can only lead to one thing: unnecessary wins. They don’t have to worry about fans filling seats or putting bags over their heads. It is a rare situation where boos won’t be ugly at home. Just ride this Titanic out to the tune of 0-16 and draft the next Peyton Manning.

6-Ron Rivera essentially gave up on a win by choosing to go for two against the Giants with 34 seconds left on Sunday. If you are undermanned, overmatched, and shockingly on the verge of a tie with a much superior team, I have no issue going for the win instead of overtime. But against a Giants team you have stifled for the entire second half? Rivera threw away a tie for the NFC East lead Sunday out of arrogance.

7-It felt like the Packers and Aaron Rodgers gave up at halftime Sunday, and that is discouraging. Down 18 points, with their offense as explosive as it is, Rodgers basically showed no interest in out-dueling a relentless Bucs pass rush. It was reminiscent of the NFC Championship game in January against the 49ers. If you are going to pelvis thrust up 10, show some heart down 18. A shameful discount double check indeed.

8-Doug Marrone is officially admitting that benching Gardner Minshew is a possibility. The mustache, bell bottom pants, and stupid van were quick to hide the fact Minshew always stunk. He was fun, but that act wore thin. He now will go down as a bigger one-hit wonder than Hanson was with “MMM Bop.”

9-The Bengals are still the Bengals until further notice. Up 21-0, Joe Burrow had real magic working for him. I don’t care how untalented your team is, Philip Rivers’ teams implode when the going gets tough. Blowing a 21-0 lead to Philip Rivers is more rare than me ordering a salad for lunch. Poor Joe, don’t look now, but Zac Taylor may not be the coaching answer.

10-Maybe we were premature in believing the Browns belonged with really good AFC teams. They were punched in the mouth against the Steelers to the point Baker Mayfield had to be removed for his own safety. The Browns are still a while away from being true contenders. The playoffs are attainable, and Kevin Stefanski appears to be the answer. But we just need to take a deep breath in excitement when wondering just how good this team actually is.

Five Games to Chew on

5-49ers @ Patriots: The 49ers bounced back off the mat with a huge division win against the Rams last week, and now they have another huge test of going on the road to New England, where Jimmy Garoppolo can show Belichick – now that Brady is gone – just what could have been. Cam Newton has said the right things this week, including having his thumbs point at him for the Patriots’ faults. This is a bit of a panic bowl for two teams trying to cling to their success from a year ago and right the ship in 2020.
4-Bears @ Rams: The Bears may be the worst 5-1 team ever. They feel the disrespect, as Nick Foles even admitted this week. The Rams can’t seem to find consistency and seem to continue to play down to opponents. This is a fascinating Monday Night Football game for two teams that probably will both make the playoffs. Khalil Mack and Aaron Donald on the same field at the very least could be an entertaining watch of who can wreck a game more.
3-Bucs @ Raiders: The Raiders have answered the bell against elite teams like the Saints and Chiefs this season. Now the Bucs come into their house on a Sunday Night, with Tampa’s defense peacocking and feeling itself. Can Derek Carr get off the mat and not wilt like Aaron Rodgers did? Perhaps, but the focus here should be on the Raiders defense because asking Tom Brady to look like a young Tom Brady two weeks in a row is probably too rich to expect. The Raiders defense needs to punish TB12 on Sunday Night.
2-Seahawks @ Cardinals: The Cardinals treated the Cowboys the way a snake treats a mouse for lunch. Now this is a big boy step up in class for them within their division. Seattle’s lack of pass rush will help Kyler Murray in this game, and if the Seahawks win, it will be in cardiac fashion. This has the potential for a lot of fun fireworks offensively.
1-Steelers @ Titans: This game was pushed to this week due to the Titans’ COVID-19 outbreak, and it creates the game of the week as both teams remain undefeated. This actually could determine the No. 1 seed in all of the AFC playoffs. Let that sink in. The Chiefs already having a loss and at times looking like they are going through the motions could lead to an AFC Championship game in either Pittsburgh or Tennessee. Can the Titans’ run game help keep the Steelers pass rush at bay? Get your popcorn ready.

Packers -3.5 @ Texans: The Packers looked so great before that Tampa trip. Now are we to suspect a slide is coming? I refuse to believe that. The Texans stink, despite playing a divisional opponent in the Titans into overtime. Their defense should not have the same pass rush to force Rodgers into the kind of mistakes he made a week ago. This is get-right medicine for Green Bay and a double-digit win should lead to an easy cover here, even on the road.
Bills -13 @ Jets: Speaking of get-right medicine, the Jets may be the biggest dose. The Bills are licking their wounds after being embarrassed by the Titans and Chiefs on the ground. Frank Gore isn’t rushing for 200 yards in six weeks, let alone one game. The Jets are uninterested in winning under Adam Gase. If you aren’t picking against the Jets at this point with big spreads, you are missing out on free money. A two-touchdown cover should be as easy as Sunday Morning.
Browns -3 @ Bengals: The Ohio rivalry is back, and the Bengals have to feel like long term they are in a better position at the quarterback position. When these teams met previously on a Thursday Night, the Browns got it done and outmuscled the Bengals for their first win by punishing them on both lines. Myles Garrett can wreck this game with the Bengals offensive line in tatters. The Bengals have a chance to be the Browns’ daddy soon, but it isn’t in 2020.

Brats in a Blanket. It is Oktoberfest time folks, throw on the lederhosen, poor a pint, and wrap a brat in a blanket for your football weekend. We have all seen the American version, pigs in a blanket, so twist that with a German flare this weekend. Get yourself some brats, some cheese, some crescent dough, some “everything but the bagel” seasoning, and some Tums for these bad boys. They take about a half hour to prepare, so it is something that can be done easily while watching the pregame show. There are a variety of recipes on the internet. The one my sister uses annually is here.