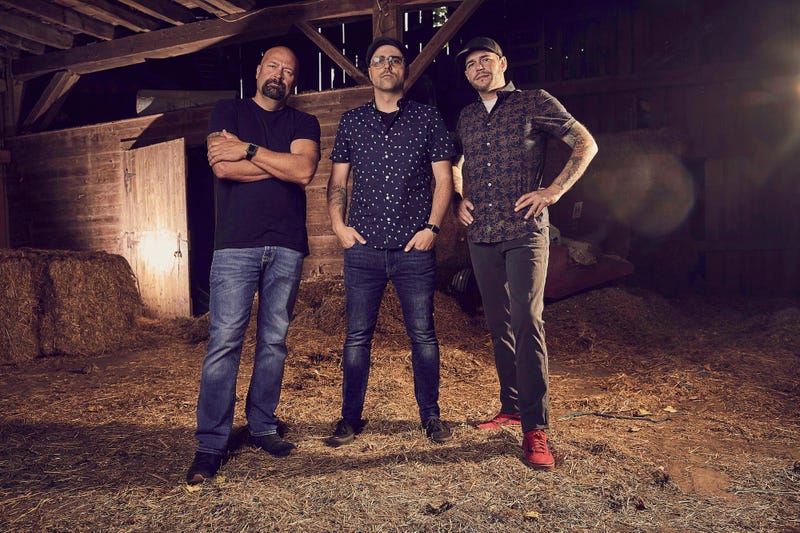 Cadaver Dogs Are Called in for the 2 Hour Special Premiere on Wednesday, April 22 at 8 P.M. ET/PT

Jason Hawes, Steve Gonsalves and Dave Tango, the paranormal investigators responsible for igniting the ghost hunting phenomenon, are back for more adventures to the other side. The second season of the hit Travel Channel series, “Ghost Nation,” premieres on Wednesday, April 22 at 8 p.m. ET/PT with a special two-hour episode, and then returns with a fresh batch of weekly one-hour episodes airing at 9 p.m. ET/PT.

This season’s locations have bigger mysteries, are more chilling, and have never been investigated on television. Not only will the team be helping distraught homeowners, they’re also bringing their skills to an abandoned prison complex and a menacing tattoo parlor. And this time, they are calling in an old friend for some help. Paranormal investigator Shari DeBenedetti joins the investigations to keep a close eye on the monitors, reviewing footage on the hunt for all things paranormal.

“After 15 years of hunting ghosts, we know that finding evidence of paranormal activity won’t be enough to solve these problems entirely,” said Hawes.  “We need to get to the source of the disturbance to bring these families much-needed peace, or else innocent people will continue to suffer. Since these are high-stakes personal cases, fans will see double the evidence and double the scares – all season long.”

On all investigations, collecting evidence is just the beginning. The team isn’t just parachuting in to conduct a cursory review of the case. With the help of their local contacts, they’re going to embed themselves in the community, conducting multi-day investigations in an effort to track down the true source of these hauntings and restore peace to the living.    Under the United Paranormal Research Organization (UPRO) banner, it isn’t only Hawes, Gonsalves and Tango facing off against an unseen entity. Local paranormal groups, sometimes even the homeowners themselves, will join the team as they employ new devices and techniques for confronting and questioning spirits. They’ll do whatever it takes to entice the ghost into telling its story and stop at nothing to get to the bottom of the paranormal phenomena. New locations this season include: Louisburg, North Carolina; Warwick, New York; Waynesville, Ohio; Biglerville, Pennsylvania and Blair, South Carolina. Go to TravelChannel.com/GhostNation for show extras, behind-the-scenes exclusive videos and photo galleries featuring locations from the show. Plus, check out the brand-new digital series “Up Close & Paranormal”(wt) where, in an intimate discussion, the “Ghost Nation” team will share insight into their investigative tactics, advice for up-and-coming investigators and more. Follow @TravelChannel, @GhostNation and #GhostNation on Facebook, Twitter, Instagram additional content and updates.  Follow the UPRO team on Twitter:  @Jchawes, @stevegonsalves1 and @davetango

STEVE GONSALVESParanormal Investigator, Former Police Officer, Public Speaker, Author Steve Gonsalves, a former police officer, has been a public speaker and educator about paranormal phenomena for more than 18 years.  The paranormal pioneer helped pave the way for a worldwide paranormal explosion as a main cast member of the hit television series “Ghost Hunters,” which included the spin-offs “Ghost Hunters Live” and “Ghost Hunters Academy.”  Gonsalves started his work in paranormal studies at a very young age and is well-educated in the field, having investigated over 1,000 reportedly haunted locations. He had the privilege of working closely with famed investigator and paranormal pioneer Dr. William G. Roll (Poltergeist) at the Rhine Research Center. Along with his multiple appearances on a variety of paranormal series, Gonsalves executive produced the horror short “The Captured Bird,” alongside famed writer and director Guillermo Del Toro . He has also been a featured guest on numerous television shows and radio programs, including “The View,” “Fox and Friends,” “Steve Harvey,” “Larry King Live” and “Katie” featuring Katie Couric.  Aside from his work on camera, Gonsalves develops and produces content for television.

Biglerville, PA  -  “The Witching Tree”Jason, Steve, Dave and Shari answer a distressed couple's call for help in Biglerville, Pennsylvania. The newlyweds believe a cursed "witching tree" in the yard is behind the apparitions and unexplained noises haunting their 18th-century farmhouse.

Waynesville, OH  -  “An Unholy Haunting”Jason, Steve, Dave and Shari head to Waynesville, Ohio, to investigate claims of paranormal activity at a former Catholic church. The team suspects a disgraced priest may be behind the scratches, bizarre apparitions and chilling EVPs.

Warwick, NY  -  “School Spirit”Four new team members join Jason, Steve, Dave and Shari on their investigation of the Mid-Orange Correctional Facility in Warwick, New York. They scramble to find answers to the supernatural turbulence holding the property, and its new owners, hostage.

Blair, SC  -  “Dixie Demons”Jason, Steve, Dave and Shari travel to Blair, South Carolina, to investigate reports of demonic activity at a 200-year-old plantation. Numerous deaths on the land and a dark family secret means the team has their work cut out for them.