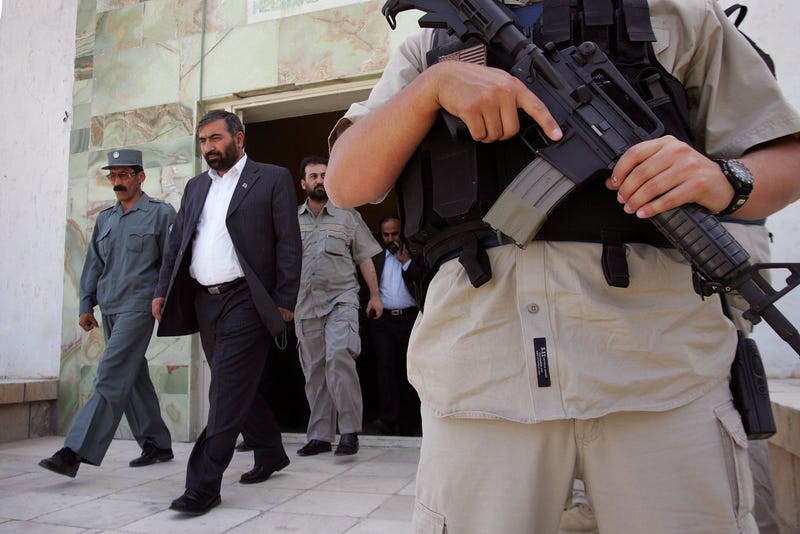 Since 2001, the private security industry has boomed domestically as the U.S. government and private organizations seek to increase their security posture. At the same time, security work for contractors overseas has also greatly expanded with contracts issued for everything from armed mobile security to static security and executive protection.

While deemed necessary by the government and corporations, private security contractors have also been controversial among those who view it as a privatization of the military, believing that the state should maintain a monopoly on the legitimate use of violence. The reality of course is inherently gray, some may argue intentionally kept that way by lawmakers who find security contractors useful and cheap to employ as well as being conveniently expendable when things go wrong.

And they do go wrong. Perhaps the most notorious example is when Blackwater contractors opened fire in Nisour Square in Baghdad in 2007, killing 17. Four contractors were convicted of the killings but later pardoned by President Donald Trump. Other examples of security contractors getting into trouble are not hard to find, such as former Special Forces soldiers working for SilverCorp who attempted a coup in Venezuela, TigerSwan's legal troubles arising from security work at the Dakota Access Pipeline, South African mercenaries imprisoned in Zimbabwe for a coup attempt in Equatorial Guinea, and many other examples that can and do fill entire volumes.

As many veterans of today's wars have discovered, after they leave military service they are very much on their own. The U.S. military is perhaps not obligated to mentor service members or veterans seeking a career in the security industry, but without any formal or informal counseling on how to navigate this industry, it is all too easy to get into trouble. Connecting Vets spoke to two veterans with deep, but varied, experiences in the field in order to find out what they would tell their younger selves, and learn what advice they would impart to veterans looking to become security contractors.

One of the first issues some experience in security contracting is believing that they are still in the military, with the same rules and protections they had while in uniform.

"I went to the vetting course for Academi, like the two-week vetting course, I remember it was the most embarrassing thing I've ever been associated with," said Tom Hall who previously served in 1st Ranger Battalion. "They were 100% ingrained in their mind that they were still in the military, that they were still doing military operations overseas, or they would be," while one of his instructors had, "already done one or two rotations with Academi and he was just talking about laying down suppressive fire on people in cities and all this other stuff."

This approach became more problematic for Hall as he began working security contracts domestically within the United States. While working for TigerSwan he was assigned to assist with oil security at the Dakota Access Pipeline (DAPL) and found that the veterans-turned-security-contractors thought their military and overseas combat experience directly to domestic security work.

"I mean, I'm in America, I'm working with American citizens, and we're calling them terrorists and insurgents," said Hall, who found that contractors he worked with were briefing that there were Russian agitprop infiltrators in the protest camps training the protestors to use .50 caliber rifles.

"There's no way this is true," Hall told Connecting Vets, adding that he was running a portion of TigerSwan's intelligence operation in the area. "And it kind of started to illuminate all these different things in the fact that a superior would hand out baseball bats to all of us and say, if you see any protesters behind police lines, you have our full permission to break their legs, which is a felony in America, you can't do that. But these security contractors, a lot of them still thought they were in the military."

However, other contractors took these words from their superiors to heart, according to Hall, at least in part because they were young veterans and answering to older veterans who retired with more rank. In other words, the military chain of command persists in some security companies.

"Whether they're a young Ranger, young Green Beret, or Marine, they see a (retired) Delta Force sergeant major, like, holy shit, I'm gonna do whatever he says," Hall recalled. "Well, the truth of the matter is, yeah, they might be tactically as proficient as you can possibly be but when it comes to leadership in the civilian world, they're almost as inexperienced as anybody else at it."

Over the last 20 years, the dynamics have shifted in the security contracting world, and gone are the days of making $1,000 a day in Iraq or $500 a day doing maritime security in the Gulf of Aden.

"The guys who are serving now and are looking to come out, probably won't ever have those opportunities, again, because it's much more tightly controlled now. So I would suggest that they pursue their career in their military as long as they can," says John Gartner who served in the Australian and Rhodesian SAS before becoming a contractor, a job that has literally taken him around the world from mines in Africa to training missions in Sri Lanka and executive protection for a Saudi Sheik. He is the founder of the security firm OAM.

"When I try and recruit people, my focus is on guys who've done 20 years in the military, they've gotten out there on a pension. So they have a comfortable living standard," Gartner told Connecting Vets. "They're not short of money, but they're still young enough to want to do things. I would caution very, very strongly that they don't think about getting into this industry that young."

Contractors can find themselves afoul of the law in several ways, particularly if they are not aware of the nuance of the law in their home country.

"For example, now in Burma, with what's happening up there, and Australia is just sort of decided to stop cooperation with the Burmese Defense Force, because of the the the recent coup, but until a couple of days ago, they were still engaged with them. And that's a dirty regime, you know," said Gartner, who is an Australian citizen. "But if I, for example, decided that what the Karen are doing up there is a worthy cause. And I went to train them under Australian law, I can be prosecuted, even though they're fighting against a really dirty regime down in Yangon. So you've got to be very careful."

Another dynamic, Gartner said, is something he sees time and time again. Security companies start off small with a cadre of highly experienced professionals, but if they secure high dollar contracts with large manning requirements, they are then forced to lower their recruitment standards.

"As it gets bigger, they expand more, then the quality goes and deteriorates further and further, it does diminish, there's no question about."

In 2008, Gartner said that he was in Amman, Jordan where he came across 20-year-old Blackwater contractors trying to get into shape prior to deploying to Iraq in a few days. While the contract may have required that they hire ex-Special Operations soldiers, when a company needs to hire hundreds of them rapidly, they may hit a wall.

"Guys, you're going to find them where you can, because you're charging the client for them," Gartner explained.

Gartner, now 69 years old, told Connecting Vets that he is long done with the rat race of chasing contracts worth hundreds of millions of dollars because they don't really exist. Today, he is searching for small, high-quality contracts, which would involve deploying 5-10 ex-Special Operations soldiers on training missions.

Hall said he was likewise disinterested in the security contractor circuit he found in the United States.

"If you want to go be a gate guard for Academi or whoever else in Afghanistan, great, you're gonna make three 400 bucks a day and essentially you're sitting in Afghanistan, making 60-70 grand a year, it sounds really cool. Sounds really great. But it's not sustainable," Hall explained. "There's no real added benefit. Nobody cares when you get out if you want to come back to the bloated security market in the U.S. after you contracting Academi or whatever.

"That's what I would explain is this the raw honesty and truth behind it, you're not making $1,000 a day Blackwater money, you're making a couple hundred bucks a day to sit in the guard post and be bored out of your mind," Hall said.