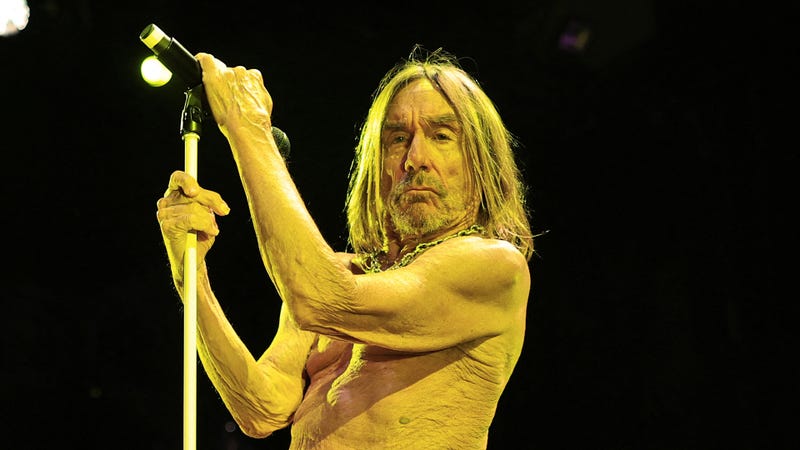 On the latest Broken Record podcast with Rick Rubin, Rick reminisces with Iggy Pop over two episodes about his early days, recording Fun House with The Stooges in Los Angeles, the first time he saw the ocean, and more, intermixed with a discussion about his newest album, Every Loser.

As lead singer of The Stooges, Iggy Pop was known for his wild contortions and animalistic stage presence. At 75 years old, Iggy just released his newest album, Every Loser, and this week, he shares some incredible stories with Rick Rubin about his tumultuous career over two consecutive episodes.

"Basically, I would write up something and then go down into the rehearsal room in the farmhouse and pull teeth to get everybody together for rehearsal -- that's band life in those days," Iggy remembers of The Stooges days. "We'd rehearse it up then go out on the weekend and play the new song in our sets until we had a whole repertoire," Iggy adds. "The big number that Ron [Asheton] really aced, which I think is my favorite number... was 'T.V. Eye.' That's the best one because he could actually play a guitar, I couldn't."

In part two, Iggy goes in-depth about the years he spent working and touring with David Bowie; he explains how the legendary 'Godfather of Funk,' James Brown and The Doors inspired his wild performance style, and even details the stage antics that would lead to Iggy bleeding on stage for the first time.

Speaking of the influence James Brown had on Iggy, he says "sure it's amazing to watch what he's doing and everything, but what's really behind it, what makes it click, " he explains, "from the moment he's getting ready -- even before he steps out there -- until he's gone from your sight, the concentration never ebbs. He never goes down to 90% while he reaches for a glass of water... no, no. 100% at all times. It's a concentration that resembles paranoia."

But it was seeing The Doors on stage for the first time, however, that finally pushed Iggy to do the same with The Stooges. "I was just fascinated... They got through a very short program and left, basically; they were kind of lucky not to get their butts kicked. It was a crew-cut time still for most people then, so I thought, 'well boy... I could do that... I could alienate!"

Listen to the full episodes featuring Iggy Pop-- now playing on Audacy -- and follow along for even more conversations with hosts Rick Rubin, Malcolm Gladwell, Bruce Headlam, and Justin Richmond as they speak with the musicians you love to discuss their lives, inspiration, and craft.

Browse and follow more of Audacy's all-new stations like Audacy's Rockternative, Drivin' Alt, New Wave Mix Tape, 80s Underground, Rock N’ Road, Wake Up and Rock, ALT Roots, and The Roots of Rock for those who crave the early days.