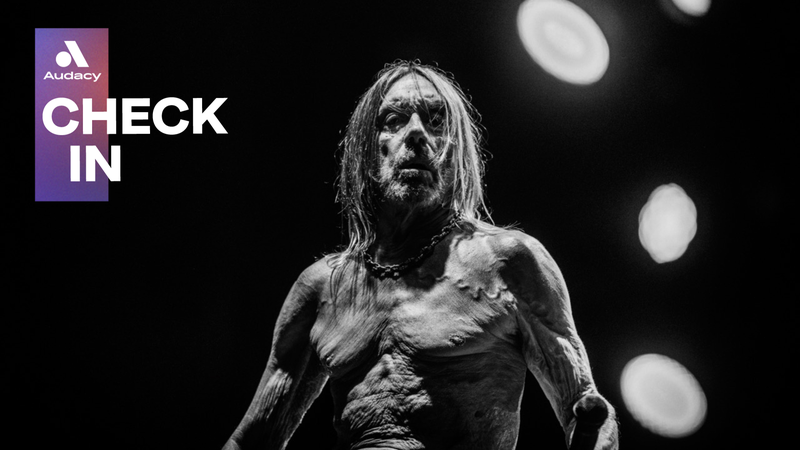 Known as the "Godfather of Punk," one of the most exhausting performers to ever witness on stage, and Audacy host Jolene's personal "King of the Underdogs," rocker Iggy Pop joins us today for an Audacy Check In to give us some dirt on his latest single, “Frenzy,” and what to expect in this next stage of his illustrious career with his upcoming album Every Loser.

For many longtime fans, Iggy has and will always remain the "King of the Underdogs," as Jolene puts it, and he's more than happy to assume that title. "You know, there is that aspect," says Iggy. "My favorite t-shirt is a picture of a rescue pit bull and it says, 'always root for the underdog,' so I'll cop to that. I've been up and I've been way down, so there you go." Iggy admits he still has nightmares about those lowest of times; "I'm usually barefoot and I have like a crinkled up dollar bill in my pocket," he laughs. "I'm in a strange city on a dirty street knocking on doors, but there's no doorknob and nobody there. But that's OK, it's fun to wake up!"

Describing his mindset writing "Frenzy," Iggy says the actual physical environment he was surrounded with on an island in the Caribbean was a stark contrast to where he was in his mind. "Mentally and emotionally, I was in the good old USA duking it out with a douchebag," he admits, "that's all I'm gonna tell you about the actual lyrics. Other than that, the rest of it was one of these curious examples of when you're in a very heightened state, something that feels like a fight or feels like anger -- many, many things circle around your mind all at once, your different synapses are firing. So, the song has sharks, it has a little love interest as in 'shut up and love me,' the possibility of death... a lot of stuff in there, but it doesn't really matter. It could have been anything, it's just ping-pong balls going off in my mind."

Later on in the interview, Iggy revealed that his introduction to producer Andrew Watt came from perhaps an unlikely acquaintance: namely one Stephen Patrick Morrissey. "I got an email from Danger Mouse," Iggy explains, who ran into Morrissey and asked for his contact. Eventually, Morrissey reached out asking if Iggy would sing on a project he was working on with Watt. "Which I thought wasn't going to work because he's a very smooth, very fine singer and I'm a very rough singer with only four or five notes in my bag," says Iggy. "But it was him, and I had a lot of respect for him so I said 'sure.' I ended up submitting a vocal for a terrific album that Morrissey made with Andrew, but it's hit some snags with the business, it's not out yet. I'm sure they won't use it... because he didn't need me on the album. But I had a feeling Andrew just wanted to meet me."

Rock fans will also be happy to know that also featured, aside from the previously mentioned musicians on “Frenzy,” Every Loser also features appearances from Travis Barker, Stone Gossard, Josh Klinghoffer, Jane’s Addiction members Dave Navarro and Eric Avery, and late drummer Taylor Hawkins. "Taylor plays on the album; it's an unbelievable energy that this guy has. He also played me in film, you know? He was me in the CBGB's movie," Iggy remembers, "and a poster was his abs as my abs. I met him, I opened for Foo Fighters in 2015 at Knebworth, and I never really understood fully what they did and then I stood there side stage and listened to that thing and listened to what he was playing, and it was otherworldly. It was advanced, and powerful, and relentless, and highly detailed all at the same time."

Every Loser, scheduled for release on January 6, 2023, features original artwork by world-renowned artist Raymond Pettibon and will arrive along with tons of exclusive offerings including limited vinyl, cassettes, and cd versions, plus an exclusive relaunch of the legendary fanzine, Punk. Pre-order and pre-save your copy of Every Loser right HERE.

Listen to the full Audacy Check In with Iggy Pop above for more background on the new album, plus find out what else Iggy & Co have in store for fans in the coming months -- and stay tuned for even more conversations with your favorite artists right here on Aucacy.com/Live.

Listen to 80s Underground and more on the free Audacy app

Browse and follow some of Audacy's all-new stations like New Wave Mix Tape, Punk Party, 80s Underground, 80s Guitar, Rock N’ Road, Freedom Rock, The Canyon, Arena Rock, Wake Up and Rock, and The Roots of Rock for those who crave the early days.