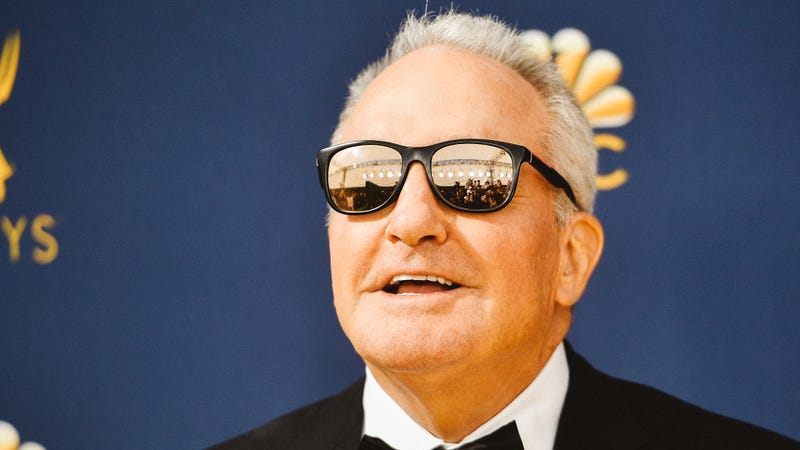 Fly on the Wall podcast hosts Dana Carvey and David Spade welcome their old Saturday Night Live boss and source of at least 3 hilarious impressions per episode, Lorne Michaels, to the show to look back together at some of their fondest SNL memories over the years.

Back again for round two, this week's big deal guest Lorne Michaels is the recipient of (count ‘em) 21 Primetime Emmy Awards from 98 nominations, and holds the record as the most nominated individual in the award show's history. He certainly must hold some other kind of record for being able to put up with Hollywood's biggest stars during their come-up, and as evidenced today, well afterward. Best known as the creator and producer of NBC's long-running sketch show, Saturday Night Live ('75–'80, '85–present), Lorne has also filled producer roles on the Late Night series since '93, The Kids in the Hall from '89 to '95, and The Tonight Show since 2014.

This year, Fly On The Wall podcast hosts and former SNL cast members Dana Carvey (1986-1993) and David Spade (1990-1996) have been diving deep into the inner workings of the show through colorful and candid interviews with past and present castmates as well as outlying comedians and actors who still count the show as a major influence. It's safe to say that during each and every episode Lorne's decision-making has been mentioned in one way or another, naturally prompting the hosts, WELL known for their celebrity impressions, to sneak in a jab or 20 -- and when Lorne's actually in the room, it's pretty hard to keep track of who's who!

Finally answering fans' burning question, "When will you have Lorne?," Dana Carvey admitted in Part 1 that he simply placed a call to the man himself, joking that Lorne didn't even know who it was speaking on the other end. "It really reminded me of being back at 'SNL,' because it's me, you, him; like sitting at read-through or sitting in a meeting," David says. "You have that reverence for him, you want to make him laugh, he's like a father figure in a weird way."

"This won't be in any way uuuused," Lorne asks right at the jump, while receiving a delivery of noisy snacks. Keeping with that thought, during their chat the topic of choosing what to cut from a sketch was brought up, with Dana Carvey remembering he had to remove the word "penis" quite a bit, and instead employing more colorful terms. "I think for us... because it's live and because it's on the honor system," Lorne explains, "I was at the Emmys the other night and a bunch of people said 'f***,' and yeah you get a laugh, but it's not going to age well. But it is that move, the temptation to do it, and for us, we would lose affiliates -- I don't think we would lose anything anymore."

"When we were doing 'Wayne's World,' in 1990" he continues, "I was on a trip with people that I wasn't normally with and they talked about watching the show with their kids. Now, in the '70s you're not supposed to trust anyone over 30, and it was like we were doing it for the people we knew, and we didn't think the rest of the country cared. They really didn't until 'Mr. Bill' showed up."

Lorne remembers, "they were talking about sitting there with their teenage daughter and how great it was to both be laughing at the same thing as a family. We were doing the Madonna with the Evian bottle... and I'm going, 'ooh, if I had a 16-year-old daughter that would be like, really cringe to me.' We do lots of things that are shocking, but I think you can't just be shocking."

Throughout the interview, the trio also gets into a discussion about Lorne's emotional connections to the cast members past and present, and more from his tenure producing a hit television show for almost a half-century.

Decompression after working almost 24/7 for so many years -- in studio and schmoozing at dinners -- came easy for Lorne, he says, once he had children to come home to following the after parties. "They're the priority and you're not; you get through that period," he says.

That same type of decompression, he found, was something he had been delivering to viewers for years. "I think for me, particularly in the pandemic and for the whole of the '16 election and afterwards, you sort of went, 'oh people are counting on us talking about it and being there.' That was a huge thing. When we did those at-home shows during the pandemic... it's just the DNA of the show; we show up."

Listen to both full episodes featuring Lorne Michaels above -- now playing on Audacy -- as Cadence13 invites you to be a Fly on the Wall with Saturday Night Live alumni Dana Carvey and David Spade, behind the scenes as they reminisce about their most memorable stories and moments with friends of the show. In each episode, you’ll hear from your favorite cast members, hosts, writers, and musical guests as they share never-before-told stories about their careers.