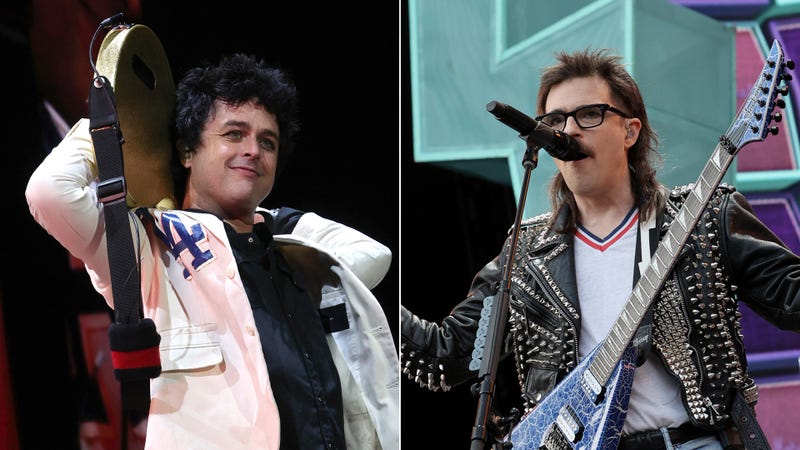 If anyone can pull off an end-of-tour prank, it's those Green Day punks -- and if there's one band in the world that would appreciate a little on-stage tomfoolery the most, you know it would be Weezer.

In a clip shared by the band, what looks like Green Day drummer Trè Cool, touring guitarist Jason White, and either frontman Billie Joe Armstrong, Mike Dirnt, or touring members Jason Freese or Kevin Preston -- dressed in a speedo, Elvis, and horse costumes respectively -- took the stage to distract Weezer as they crushed through their "Blue Album" favorite "Surf Wax America." Frontman Rivers Cuomo was obviously happy with their arrival, giving double-fists of approval when it was all over.

What's a tour without a good ol' prank at the end?! Gotcha @Weezer pic.twitter.com/ik7PTdg8dO

And here we thought the main prank of the tour was Rivers' moustachio. Go figure.

The final date of Green Day, Weezer, and Fall Out Boy's North American leg of their joint Hella Mega Tour was on September 6 at Seattle's T-Mobile Park and the next time the bands will be together again will (hopefully) be in the summer of 2022 when they take the show to Europe.

Listen to more of your favorite music on Audacy's Alterna 00s, '90s and Chill, and ALT Roots exclusive stations -- plus check out our talent-hosted Megan Holiday's My So Called '90s Playlist and Scott Lowe on the Go's Post Modern Music Box!