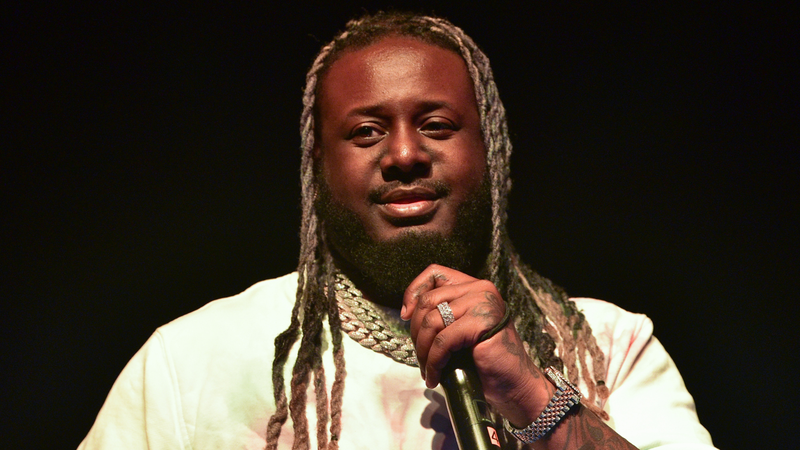 T-Pain was far ahead of his time when he debuted in 2005, heavily using auto-tune as the foundation of his sound. In spite of having an exceptional singing voice naturally, the Florida native opted to use the now-popular alternative to breathe life into the industry.

The "I'm Sprung" crooner cranked out hit after hit for years, but fell into a deep depression when his friend and fellow singer, Usher offered some unwarranted criticism. In a snippet for the upcoming Netflix series, This Is Pop, T-Pain sighed deeply when the interviewer stated, "I heard a story about you and Usher on an airplane."

The 35-year-old explained, "we were actually going to the 2013 BET Awards and we're all in First Class. I was asleep and I was awakened by the flight attendant. She was like 'Usher would like to talk to you in the back.'" After some small talk, Usher seemed "[very] concerned," according to the "Buy U A Drank" singer. Usher then stated, "man, you kinda f***ed up music. You f***ed up music for real singers."

Solemnly, T-Pain continued, "I didn't understand. Usher is my friend." Confused and hurt, he revealed, "that was the very moment that started a 4-year depression for me."

I hate how the world did T-Pain. pic.twitter.com/6Ib9dzHTjY

Many rightfully rushed to T-Pain's defense. Esteemed journalist/author, Gerrick Kennedy wrote, "it really upsets me how much disrespect T-Pain encounters. He’s one of the most absurdly nice humans on the [planet] and he’s broken too much ground in music for folks to carry the way they do—and it really kills me cause his [DNA] has been everywhere for damn near 20 years now."

Culture journalist, Njera Perkins wrote, "you can visibly on his face [see] how much that one conversation impacted him. That’s a heavy claim to put on one individual who’s hardly to blame, and what’s even worse is people give T-Pain a bad rep for auto-tune like he’s not a naturally great singer or artist."

Usher, himself, released an auto-tune heavy track, "OMG" in 2010. JAY-Z also expressed his disdain with auto-tune on his 2009 song, "D.O.A. (Death of Auto-Tune)" where he specifically name-dropped T-Pain. The singer recently expressed his struggles with his voice and presence in the music industry during his time on The Masked Singer, where he took home the grand prize— and his Sam Smith cover brought the judges to tears.