The 45th President of the United States, Donald Trump, joined NewsRadio KDKA Thursday afternoon to discuss a myriad of topics with anchor Rose Tennent just one day before a “Save America” rally in Greensburg.

President Trump’s stance on the Russian invasion of Ukraine was a theme of the discussion. Trump quickly denounced how that situation unfolded, especially how the troop removal of Afghanistan reportedly played a part in its impetus.

“When Putin watched the withdrawal from Afghanistan, which was really a surrender the way they did it. You know, take the soldiers out first, leave the Americans behind, leave the equipment behind, $85 Billion worth. When he watched that, that's when he said ‘I’m going into Ukraine,’” Trump said.

He continued, elaborating on how he feels America is different following his departure from office.

“We have a different country now, they have destroyed this country in one-and-a-half years,” Trump said.

The controversial 2020 election is still a topic of discussion among many in GOP political circles, and is even getting its own documentary, one that aims to dive deep into the voting process.

KDKA Radio’s Kevin Battle earlier spoke to Dinesh D’Souza, an award-winning filmmaker and New York Times best-seller, regarding his documentary and said it simply aims to ‘put you at the scene of the crime,’ so the consumer can make their own decisions.

President Trump weighed in with his thoughts on the documentary, and didn't hold back praise on what's considered a favorable telling of his perspective.

“Well if you’ve seen the movie ‘2000 MULES,’ which was one of the most incredible movies I’ve ever seen, it exposes the whole election scam, without question. It’s not like 90% or 80%. It exposes it without question,” he said.

President Trump added that he's looking to have a good time at the rally that he is headlining in Westmoreland County Friday night.

It is being held in support of celebrity Dr. Oz in the Republican Senate primary. Trump explained why he's endorsed Oz in the Senate race:

The rally will be held at 8 p.m. Friday at the Westmoreland County Fairgrounds in Greensburg. For tickets, which are limited, go to donaldtrump.com. 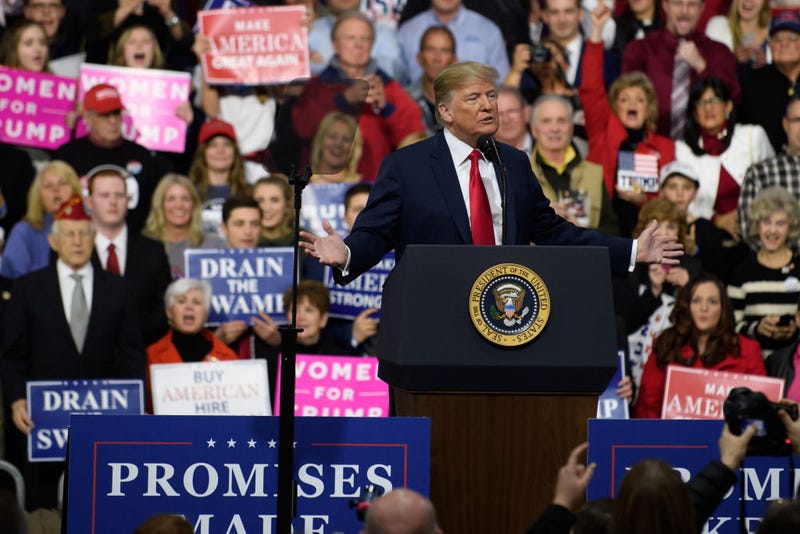 MOON TOWNSHIP, PA - MARCH 10: President Donald J. Trump speaks to supporters at the Atlantic Aviation Hanger on March 10, 2018 in Moon Township, Pennsylvania. The president made a visit in a bid to gain support for Republican congressional candidate Rick Saccone who is running for 18th Congressional District in a seat vacated by Tim Murphy. Photo credit (Photo by Jeff Swensen/Getty Images)

Trump also made it known how much better off the steel industry is due to his leadership and fortitude. U.S. Steel, headquartered in Pittsburgh, was close to shutting down, according to 45th President of the U.S.

"You wouldn’t have any steel industry right now. U.S. Steel was ready to close down. And I put tremendous tariffs on the dumping steel, they would dump steel," he said.

"If I didn’t do that – everybody from the steel industry that sees me, they come over and they want to kiss me."

After Trump's event in Greensburg Friday evening, he is set to visit Casper, Wyoming for a "Save America" rally. By then, Pennsylvania will have the results of its primary election, which is slated for May 17.

Dr. Oz faces off against four other candidates, David McCormick, Kathy Barnette, Jeff Bartos and Carla Sands. You can read a recap of the event here.