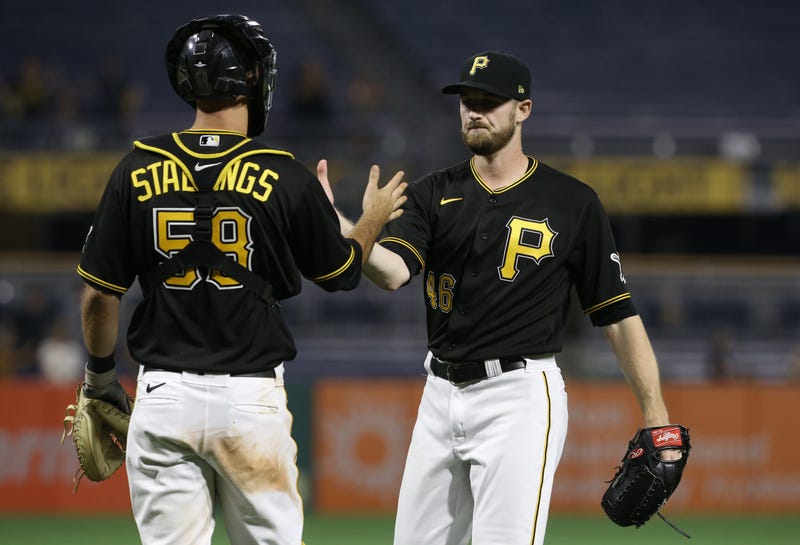 PITTSBURGH (93.7 The Fan) – Reds won nine of the 10 meetings with the Pirates in 2021, outscoring the Bucs by 60 runs heading into Tuesday night. As Cincinnati held the slimmest lead for the final playoff spot in the National League, the Pirates got number two. Final 6-5.

Bucs built a 6-0 lead before Cincinnati got four runs off Nick Mears in the sixth and a solo home run by Nick Castellanos with two-outs in the ninth.  Chris Stratton able to get the final out for his fifth save.

“He’s pitched in high leverage seventh and eighth and now we’ve moved him into the ninth,” said Pirates manager Derek Shelton.  “I think tonight is probably the highest leverage ninth inning he’s got.  He got multiple guys with 20-plus homers in a lineup that’s been very good against us.  He executed pitches.  To get through that was very impressive.”

Lefty Dillon Peters started and went five scoreless innings scattering five hits and a walk while striking out five.  It’s his first win as a Pirate.  Peters is under team control until 2026.

“That’s for them to decide,” Peters said about his opportunity with the Bucs.  “I know that I’m ready to take the ball whenever is asked.  I’m going to go out there and compete and go after guys.  If that’s for three innings or six innings, you are going to get everything I got.”

It’s his fifth start since being called up on August 15 after he was acquired in July in a trade with the Angels for cash considerations.  The 29-year-old former 10th round pick of the Marlins is 1-2 with a 2.66 ERA, seven earned runs allowed in 23.2 innings with eight walks and 20 strikeouts.