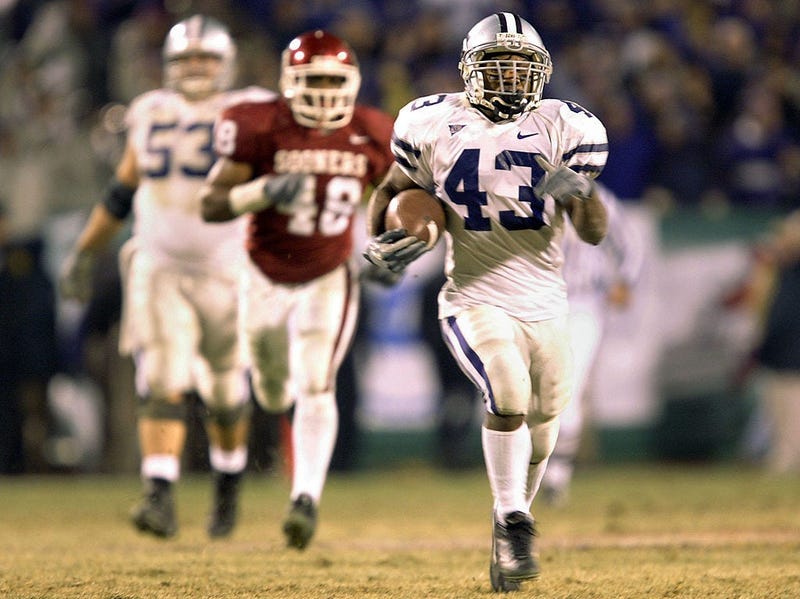 Former Kansas State running back and kick returner Darren Sproles, and former Oklahoma coach Bob Stoops will appear on the College Football Hall of Fame ballot for the first time.

The College Hall of Fame class of 2021 will be announced early next year.

*Sproles finished fifth in Heisman Trophy voting in 2003 for the Wildcats as a First Team All-American. He left K-State with 28 school records, including career rushing yards (4,979) and all-purpose yards (6,812). He was a three-time All-Big 12 Conference performer who holds the league record in career 100-yards games (24).

*Stoops was the head coach at Oklahoma from 1999-2016, and was also an assistant coach at Kansas State. He boasts the most wins in OU school history, leading the Sooners to four championship game appearances, and winning the 2000 national title. He is the only coach in the BCS era to win a national championship and every BCS bowl game. He led the Sooners to 10 Big 12 titles and a school-record 18 consecutive bowl games. He was the 2000 AP National Coach of the Year and six-time Big 12 Coach of the Year.

*Bishop was a 1998 consensus First Team All-American, and winner of the Davey O’Brien Award. He was the 1998 Heisman Trophy runner-up, leading the Wildcats to the 1998 Big 12 North title and a berth in the conference championship. He was a two-time all-Big 12 selection, setting 14 conference and 34 school records by career’s end.

*Smith was named First-Team NAIA All-American in 1985. He was a three-time First-Team All-Conference selection (1984-86). He holds 13 school records for the Threshers. His 47 career touchdown receptions were two short of the national record.

The ballot was sent to more than 12,000 National Football Foundation members. Votes will be tabulated and then the NFF honors court will select the class of 2021 from the top vote-getters.