Ed Orgeron will be out at the end of the season, and the quarterback that helped LSU's coach lead the Tigers to the top of college football didn't hold back his frustration about the decision.

Joe Burrow spoke about his former school and coach after his Cincinnati Bengals defeated the Detroit Lions on Sunday.

"It’s disappointing to me because he’s really a man that gave me an opportunity when nobody else really was," Burrow said. "I wouldn’t be here without Coach O. I’m forever indebted to him as a person and as a player. Our relationship will continue for the rest of our lives. I love the man, I love the coach."

Burrow's affinity for the Cajun coach wasn't exactly a secret. Orgeron was the man who recruited the Ohio native to transfer to LSU after missing out on a starting job at Ohio State, and helped lead him to one of the best quarterback seasons of all time en route to the Tigers' first College Football Playoff title and a Heisman Trophy. Burrow shed tears as he thanked his coach during his acceptance speak for the illustrious award.

The decision came down to wins and losses, Athletic Director Scott Woodward said. He's got a point with the Tigers holding a 9-8 record since that championship game, even after the latest upset win over Florida. Burrow concedes that, but still looks at the larger picture.

"They hadn’t been winning as many games as I know they would like, but we did just win a national championship 2 years ago. So that’s disappointing," Burrow continued. "I love Coach O and everyone over there, so I hope he’s able to find a place where he feels like he’s welcomed." 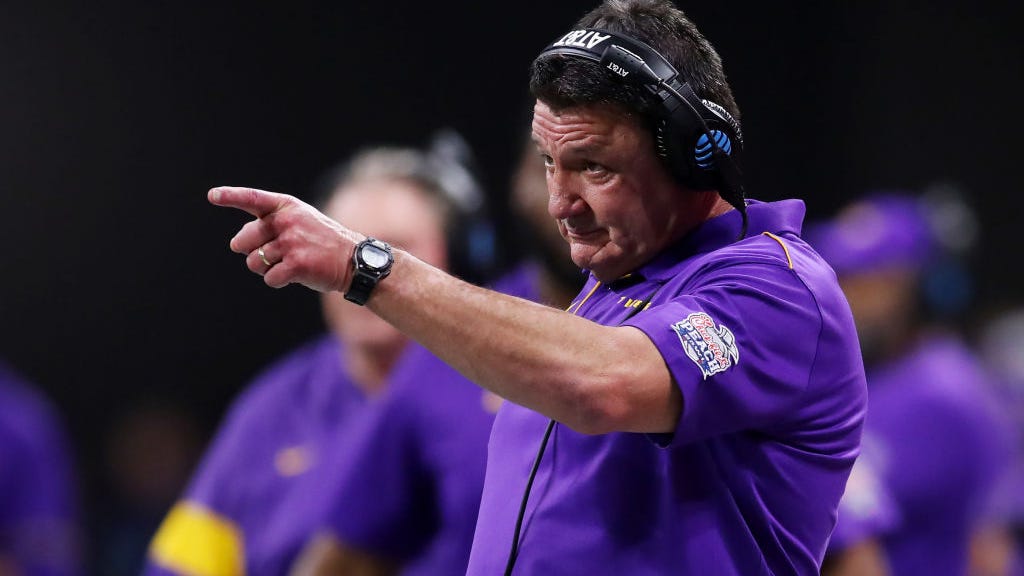 That welcome place won't see Orgeron in a coaching capacity any time soon. He'll finish out the season the season as the Tigers head coach, even though the search for the program's next leader "begins today," per Scott Woodward. Orgeron made it clear he doesn't intend to coach anywhere in 2022, and per his extensive buyout agreement he is barred from taking a head coaching job in the Southeastern Conference for 18 months. He'll begin receiving payments on that buyout as of Dec. 15 this year, the first in the amount of $5 million. The deal will dish out eight more payments to Orgeron through 2025.

Orgeron, 60, didn't indicate whether he planned to seek out future head coaching opportunities. But he's ready for a bit of a break, he said, with a coaching career that's spanned 37 years.

“I want to take a little time off. … I think I’ll have