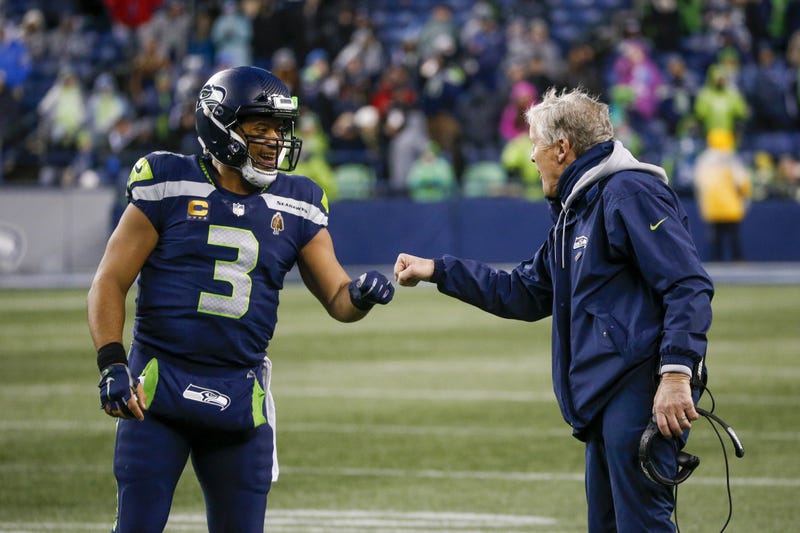 Ayo 12s!
We've begun our descent into the final week of the Seahawks season and the NFL world has already begun to get the rumor-ball rolling.
Catching those up that weren't aware, the rumor mill has been brewing for several years now that Russell Wilson is no longer happy with the Seahawks organization and looking for a change. This theory was fueled with circumstances such as seeing him having a serious talk with higherups in the organization, and stories that spread saying that he would waive his "no-trade" clause for a select few teams. And this narrative has bled into this year as well

Find out why ⬇️ pic.twitter.com/hMVqhDEYk6

The other side of this coin looks to the sidelines, wondering whether or not this is in fact Pete Carroll's final year with the team, having suffered the first losing season in the Russell Wilson era. This particular theory is more of a call-to-action from not just the fanbase, but familiar faces as well

Me and Jody Allen need to have a discussion about the future of the seahawks. #JustSayin

The facts don't lie about how this season turned out. Would it have been a better record without Wilson's unfortunate early-season injury? Probably, but how much? The team was already looking off-kilter without much hope of turning things around on a foundational level. This speaks to a much bigger issue that Seahawk fans have been observing for the past several seasons. Yes, the Seahawks were winning games, but it was the same song and dance of looking like they were going to give the game up for three-and-a-half quarters, and then pulling off a massive spectacle of a win. Fun to watch, in a heart-stopping kinda way, but it showed the glaring issue that the Seahawks haven't been in control of a competitive game in quite some time.
Is it Pete? Is it the coordinators? Is Wilson over-hyped like some players seem to think he is? I don't know, but there's a different air in this particular offseason. I think this is going to rock the organization into making an even bigger shift in the offseason than we saw this last year, and I'll be watching with great anticipation.

I believe this season marks the end of a very very fun era of Seahawks football that we've enjoyed. I don't know that the next one is going to look much different, but it will change in this offseason and I'll be here for it. It was a good run 12s, enjoy this last week, hopefully we can damage the Cardinals 1 final time. Cheers 12s, welcome to the end. With that...Mike Hawk is OUT!