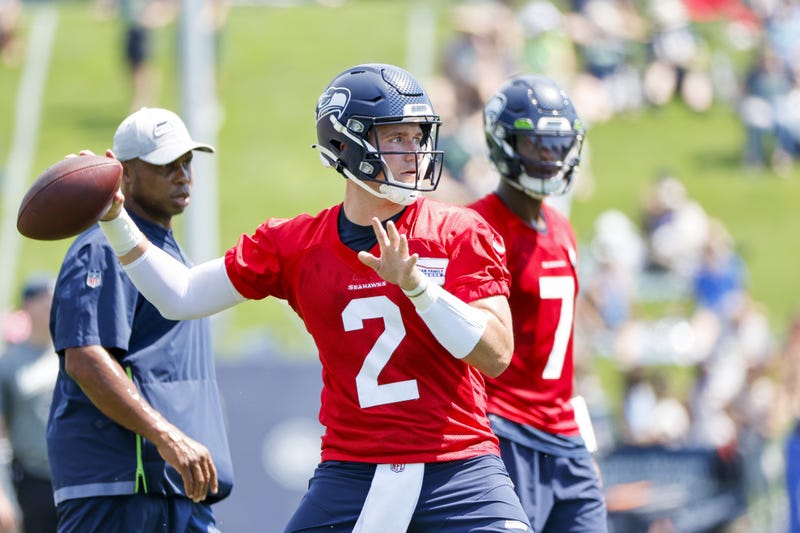 Ayo 12s!
It's been way too long, but we're finally here, SEAHAWKS FOOTBALL IS BACK BABY! For the preseason at least! We've got 3 games coming up and it's that special time where we put all the pent up love for football back into the forefront as the coaches and players try to determine who will be on that wonderous 53-man roster.

Coming off the mock game over the weekend, it sounds like there are a few takeaways that everybody can agree on. The first of which that gets me rather excited, is that Kenneth Walker III is going to be a name to watch this season. A number of talking heads have talked about how he was stolen by the Hawks in the mid rounds of the draft, and his speed and versatility are proving it. One opinion that does raise the brows a bit, is we're finding out the man has a set of hands as well! Not to put too much pressure on a rookie, but a dual threat weapon is starting to become a pretty valuable asset these days!

Kenneth Walker’s speed and burst will translate just fine to the league! pic.twitter.com/8p5kbGtBQL

On the defensive side of the ball, I think we're going to get a breath of fresh air with this new scheme as well. We've shifted to a 3-4 from a 4-3 defense, and it's starting to translate into the actual gameplay. Sounds like another rookie on the roster, Tariq Woolen, made a bit of a splash in the mock game as well, confirming some buzz about him after he was acquired as well.

Rookie @_Tariqwoolen looking good out there at corner. Solid footwork, staying with his man and then turning to locate and make a play on the ball. Excited to see him ball out. #CB #Seahawks #Rookie #GoHawks

But the ultimate question is, who gets the starting QB position? Sounds like when it comes to numbers, Drew Lock was the popular answer. There's still a ton of factors as to overall connection with the 1st squad, ability to read and adapt, and how things look when things are actually on the line. This may be a last minute decision as we head into week 1, but it should be a fun watch nonetheless.

I'm just glad to have Seahawks football back on the screen. This is going to be an interesting few weeks as we find out if we blend in just like the talking heads say, or do we prove them wrong? Will the Hawks fall to worst in the division, a bottom 5 team, or will they put the adversity on their back, and push forward to show that we were always more than Russell Wilson? It's going to be an interesting year, and I'm here for it! Let's bring on Pittsburgh and get this party rolling! With that...Mike Hawk is OUT!