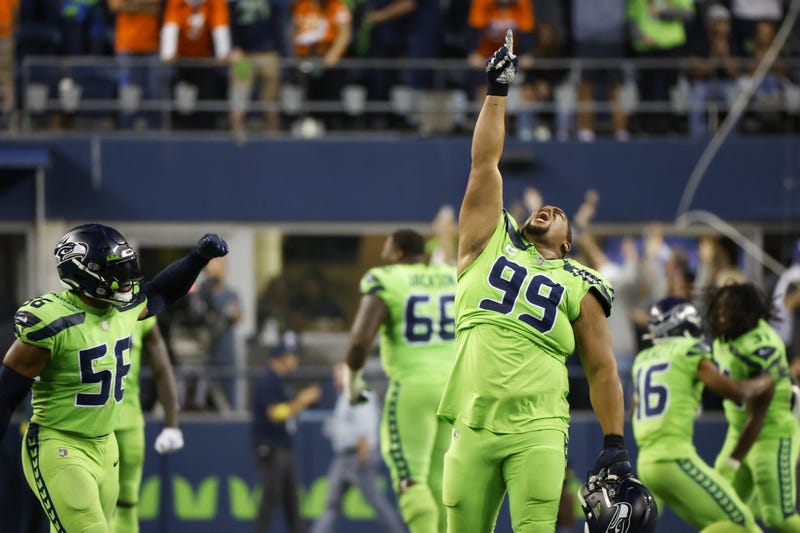 AYO 12S!!!
HOLY MAN ALIVE THE SEAHAWKS PULLED OFF THE VICTORY OF THE SEASON! Granted it's only week 1, but that's without a doubt the best game that we'll see all season, simply for the effort, implication, and moral victory that the Seahawks get to celebrate. Make no mistake, I think there's a lot more victories for our boys this season than they were expected to get, I just can't see it getting any more electric than Monday Night Football.

We live for the chaos. pic.twitter.com/7UaBk2F63Z

Right from jump, we saw a Geno Smith that was more polished than we had seen in most every other appearance. Was he elite tier? No. But he commanded that offense, was poised, and showed a ton of promise. I expect we'll see developments and adjustments that'll put this offense on the upward trajectory. The rookie offensive lineman Charles Cross put on a display and held that line like a champ! Metcalf, Locket, Eskridge, DISSLEY and PARKINSON?!?! Great work all around! All hail the slant route we can do now that we have a tall enough QB! The run game didn't catch the fire that I'm sure Pete wanted, mostly because every time Penny would make a good run, it'd get called back on a holding penalty. But be patient, he's ready to bust loose. Great work by the offense overall! Needs a little work on adjustments in the 2nd half, but that'll come with time. Great job.

I've been saying this since the preseason began, our show pony of the team is our defense. The only way we'd be able to win this game is if the defense holds off Russell Wilson and the Broncos long enough to hope for some support from the offense, and boy did they deliver. The only true blemish was a couple mistakes on the rookie Tariq Woolen, but that's just what they were, rookie mistakes. This kid's gonna be elite just give him time to throttle up. The line created pressure to a fault, the corners kept the airspace protected, and the linebackers were oh so powerful. As far as holes in our schemes, our weakness is the shortball. They charged too hard on Wilson and followed the deep ball too far, leaving the short option wide open for big gains. I'm not shocked, Wilson is elite when it comes to the long ball, and there's a distinct possibility that they were looking to make a statement and get as may sacks as possible. Hopefully we'll see those zones tighten up a bit, but a great showing by the defense.

UCHENNA NWOSU WITH A HUGE FORCED FUMBLE AT THE GOAL LINE!

The #Seahawks deny the Broncos from taking the lead in what was possibly the biggest play of the game so far.#NFL | #Seahawks pic.twitter.com/lab09jKU5G

If we don't win another game this season (highly unlikely), I'll hold my head up with pride that these boys defended their house in a most impressive fashion, and 3 cheers to the 12s for showing up and showing out. It was good to see Wilson getting a taste of what he left behind. Onward to next week, the rival 49ers are looking to bounce back after a rough week 1, and we're just the team they'll want to take it out on. Let's not give them the opportunity. With that...Mike Hawk is OUT!