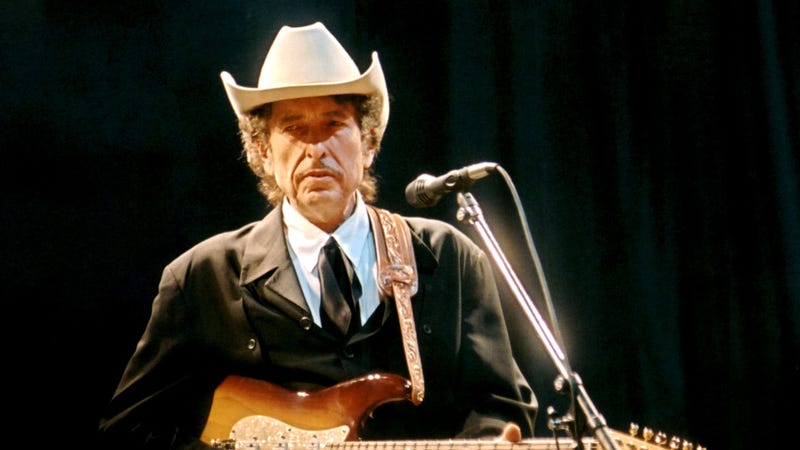 Born May 24, 1941 writer, singer, painter, guitarist, and pop culture icon Bob Dylan has been one of -- if not THE -- most prolific songwriters of not only his own generation but all those that followed. Springing from the anti-war sixties, Dylan made his mark with counterculture anthems broaching the topics of politics, religion, civil rights, social unrest and more -- all while bringing a Rock N' Roll feel to his Folk music roots.

Honor the legacy of the 'Like A Rolling Stone' singer with Bob Dylan's biggest hits and the artists he helped inspire, now playing on Audacy.

Celebrate Dylan's 81st birthday today with his biggest hits and fan-faves -- from "All Along The Watchtower" to "Maggie's Farm" -- on our Top 10 list of songs which, according to setlist.fm, Bob has performed live over his sixty-year career -- with every single one breaching the 1,000-times mark.

Dylan's often covered electric blues single "Maggie's Farm" was recorded on January 15, 1965, and was featured on that same year's album Bringing It All Back Home.

The stand-alone single “Things Have Changed,” written and performed for the film Wonder Boys, was released on May 1, 2000, and won Dylan an Academy Award and a Golden Globe Award for Best Original Song.

Featured on his his fourth album, 1964's Another Side of Bob Dylan, and was famously recorded by Johnny Cash with June Carter, released on Cash's 1965 album, Orange Blossom Special.

Written and recorded in 1962, "Don't Think Twice, It's All Right" was featured on Dylan's 1963 release The Freewheelin' Bob Dylan as well as the b-side of his "Blowin' in the Wind" single. Another contemporary favorite, the track was covered by many, most notably Peter, Paul and Mary's version which made it into the Top 10 on Billboard's Hot 100 chart.

From Dylan's sixth album, 1965's Highway 61 Revisited, "Ballad of a Thin Man" tells the story of one Mr. Jones, whose troubles understanding the hippie culture persist despite his constant questioning.

"How many roads must a man walk down, before you call him a man?" One of Dylan’s most famous protest anthems, included on his 1963 album The Freewheelin' Bob Dylan, tackles questions of peace, war, and freedom while eventually coming to the conclusion that "the answer, my friend, is blowin' in the wind."

Released on his fifteenth studio album, 1975’s Blood on the Tracks, “Tangled Up in Blue” was written by Dylan and produced by his brother David Zimmerman. and reached number 31 on the Billboard Hot 100 – and Rolling Stone has it ranked at number 68 on their definitive list of the 500 Greatest Songs of All Time.

The third single to spill into the over-2000-times area, "Like a Rolling Stone," released in the summer of ’65, was originally part of an extended work that Dylan penned following his return from a lengthy tour of the U.K. and was recorded soon after to be included on his forthcoming Highway 61 Revisited. At over six minutes and heavier than his usual sound, radio was hesitant to play the single but eventually let it fly, landing at number 2 on American Billboard charts.

Dylan's second song featured in this list to push past the over-2,000-times live marker, and featuring the unmistakable sample of a police siren, "Highway 61 Revisited" from 1965’s album of the same name, was also dropped as the b-side of his "Can You Please Crawl Out Your Window?" single in November of that year. In the early ‘00s, Rolling Stone magazine ranked the track number 364 in their 500 Greatest Songs of All Time master list.

"All Along The Watchtower" tops the list after being performed a whopping 2,222 times live over the 60 years he's been hitting the stage. Written and recorded by Dylan for his 1967 album, John Wesley Harding, "Watchtower" has been featured prominently on most of his greatest hits releases in one form or another. It is also one of Dylan’s most covered tracks, most notably Jimi Hendrix’s version, which was featured on 1968’s Electric Ladyland only six months after the original was released.

Check out some of Audacy's all-new Rock stations like Bob Dylan Radio, The 60s, The 70s, 80s Guitar, Rock N’ Road, Freedom Rock, The Canyon, Arena Rock, Wake Up and Rock, and The Roots of Rock for those who crave the early days.