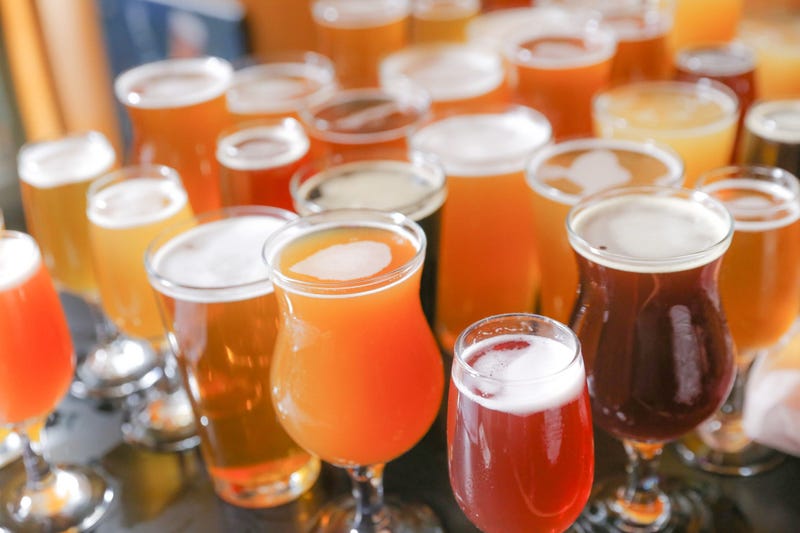 First off, Happy National Beer Can Appreciation Day!  This isn’t just any other “National Whatever Day.”  This one has some legit history behind it.  On this day back in 1935 the first ever canned beer was sold in the U.S. The first can was made of steel, weighed in at almost 4 ounces and had to be opened with a church key.  For comparisons sake, the can alone weighed almost as much as an official Major League baseball (5oz for those curious). We can thank Krueger Brewing out of Richmond, VA for taking that metallic leap of faith.  So, in honor of Beer Can Appreciation Day, here are our top 5 canned beers.  Let’s drink!

Hell or High Watermelon is a wheat beer but don’t assume its heavy like other wheats or hefeweizens. It drinks very easy so before you know you’ll go through your six-pack if you’re not paying attention.  Some folks might be scared off by the thought of a watermelon beer but have no fear.  The refreshing watermelon flavor is very subtle and doesn’t hit you taste buds until the end of your gulp.  And, on the plus side it definitely adds some beautiful aromatics.  Hell or High Watermelon can be found at just about every major grocery store.

Literally Anything by Garage Brewing

Temecula’s very own Garage Brewing has been low key brewing some of the best beer since 2013. I was introduced to their beer a few years ago with a series of specialty cream ales.  After getting my mind blown with those I had to find out what else this brewery had to offer, and we’ve been in love ever since.  Their year-round beers are definitely brewery staples, IPAs, Hefs and a Stout; but they infuse flavors and aromatics that make these styles their very own.  I mean c’mon! Hatch Chile IPA!

Oskar Blues claims their Dale’s Pale Ale is the original craft beer in a can so this beer needs to be on the list by default. Kidding, this beer definitely needs to be on every best beer list because it is that good.  This Pale Ale sort of defines the style.  If you've never tried a Pale Ale, Dale’s should be your first.  Oskar Blues describes their masterpiece as, “It delivers a hoppy nose and assertive-but-balanced flavors of pale malts and citrusy floral hops from the first sip to the final swig.”  Dale’s Pale Ale can be found at specialty markets and some major groceries stores.

El Sully is a crisp Mexican-style lager with light notes of spice.  21st Amendment has brewed a perfect lager, its crisp and finishes really clean.  I wish breweries would try to brew more lagers, but for now 21st Amendment has my full attention.  Get those limes, a chilled tajin-rimmed glass and a six-pack.  El Sully can be found at specialty stores like BevMo and some major grocery stores.

Let me start off by saying The Dude’s Brewing Company is awesome.  Everything from their year-round offerings to their limited releases are worthy of trekking down to Torrance to drink from the source.  Their Blood Orange Amber is one of my favorite beers period.  It provides a great yet subtle citrus finish and gives off great aromatics.  These beautiful cans can be found at most major grocery stores.  The Dude definitely abides!