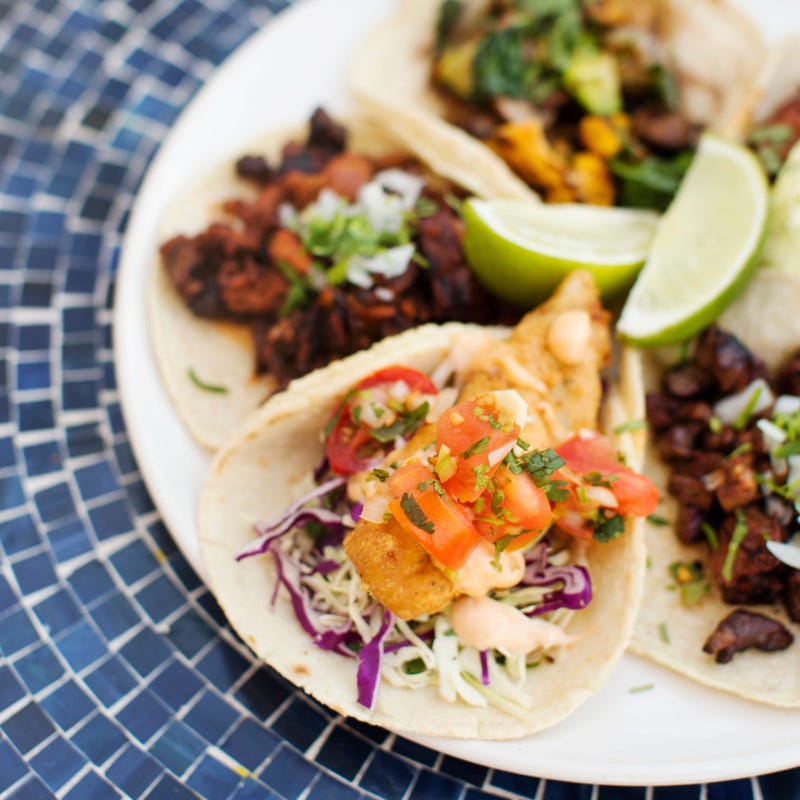 The weekend is the perfect time to eat some tacos.  I mean when is't?  We have been blessed with some of the best Mexican food particularly tacos, and no matter where you stand politically we can all be happy that we have a taco truck on every corner.  Choosing the best taco spots is like picking your favorite child, I don’t have children but I heard it’s supposed to be really hard.  With that being said, here are some of the best tacos our city has to offer:

As Jonathan Gold, da Gawd, once wrote, “The taco honors the truck.”  It shouldn’t be a surprise that some of the city’s best tacos come from a taco truck, and Tacos Leo is the perfect example.  They serve some of the best al pastor tacos around.  Leo’s roasts their seasoned pork on a trombo or a spit, like it’s supposed to be and sliced thinly into a warm tortilla and topped with a slice of pineapple.  The tacos are tiny, two biters in measurement, so order them en masse.  Or order the alambre, a tray of meat, grilled onions and peppers, covered in cheese and served with a stack of tortillas so you can pinch off your own taco.

After leaving San Diego and being so close to Mexico, I missed really good fish tacos.  I missed the crunchy batter, the flaky fish, the unapologetically spicy salsas and the unlimited lime wedges.  When I discovered Taco Nazo, thanks to some friends I was instantly hooked (no pun intended, actually that was a good one… yes pun intended).  “The pioneers of the fish taco” take a generous piece of beer battered fish, throw it on a huge corn tortilla and top it with cabbage, tomato and a refreshing crema.  And make sure you get extra Chile Gueritos!

Located on the east side of Grand Central Market, Villa Moreliana prepares their carnitas just like it’s done in Michoacan.  Slow cooked in a copper cauldron, the chunks of pork render nicely in oil and its own juices.  As if I’m not at Grand Central for a few tacos already, the cook gives everyone waiting in line or walking by a free taco to bring in business.  Like any good restaurant, once the meat is gone they close so don’t be too upset if you show up and the lights are off.  Good carnitas are not as easy to find as let’s say carne asada, you can’t just hit up any taco shop and expect juicy and delicious shredded pork.  These specialty restaurants really have to know what they’re doing and Villa Moreliana does their job very well.

Carnitas El Momo is another gem of a truck or more of a trailer that serves to hundreds of people every time their trailer pulls up.  Carnitas and Birria are their specialties and like Carnitas Moreliana they definitely know what the hell they are doing.  Using the traditional copper cauldron, you can order crispy skin or cueritos for the more acquired palate.  When you go looking for the trailer, you’ll definitely smell it before you see it.

Guisados has become a Los Angeles staple as their taco shops have popped up all over the city.  As their name implies, their specialty is stewed meats.  Guisados is known for their meat, but their tortillas are something special as well.  Being that the meat is saucier their tortillas are made thick so that they don’t disintegrate in your hand.  Try the sampler and if you like spice go for the Chiles Toreados.  But I’m warning you, it’s not for the weak.

I cannot leave Cielito Lindo’s World-Famous taquitos off of this list. They’ve served their golden and crispy beef taquitos smothered in avocado sauce since 1934.There’s nothing else to say!

Set up in the parking lot of what used to be a used tire shop, these tacos take me back to my college days walking around with my friends in Tijuana.Their Baja Style tacos take mesquite grilled Carne Asada and serve it in a beautiful freshly made yellow corn tortilla.The creamy guacamole sauce and red salsa is exactly what would be served on a Tijuana corner after you stumble out of a club on Avenida Revolucion.

Most people associate corn tortillas with tacos and flour to burritos, but don’t tell the people of Sonora, Mexico.They are known for their flour tortilla tacos.Well, Sonoratown takes that tradition and gives Los Angeles one of the best tacos in all the land.Their tortillas are award winning, recently winning the inaugural KCRW and Gustavo Arellano Great Tortilla Tournament.They could literally offer a tortilla with butter and charge you 5 bucks and you’ll pay for it.