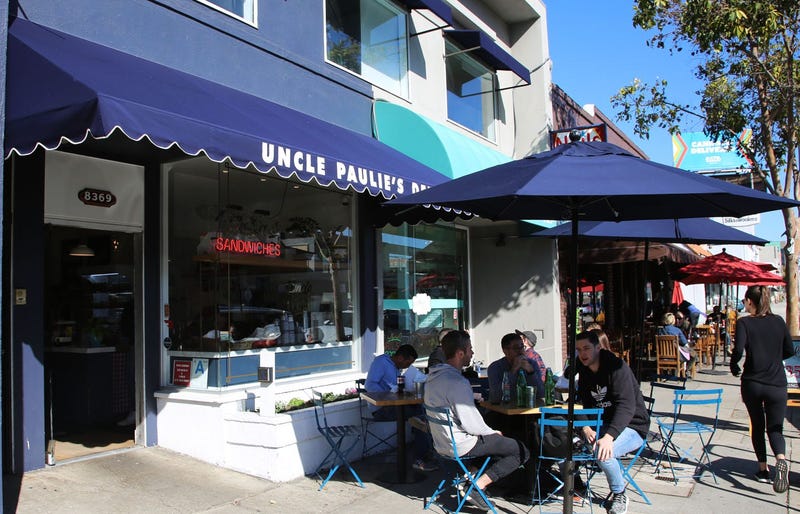 Pasadena has Roma, Culver City has Sorrento, Santa Monica has Bay Cities and for the past 2 years Uncle Paulie’s Deli has been serving some of the city’s best sandwiches in the heart of Mid-City.

Paul James claims he and his business partner sneaker designer, Jon Buscemi opened up the shop for personal reasons. They opened up because in their opinion there wasn’t anything like the delis they had back home in Queens, NY. They didn’t have a neighborhood deli to grab a sandwich or some cold cuts. With the need to fill a void in his neighborhood and some restaurant and bartending experience he and Jon opened up Uncle Paulie’s Deli on Beverly Blvd in Beverly Grove. 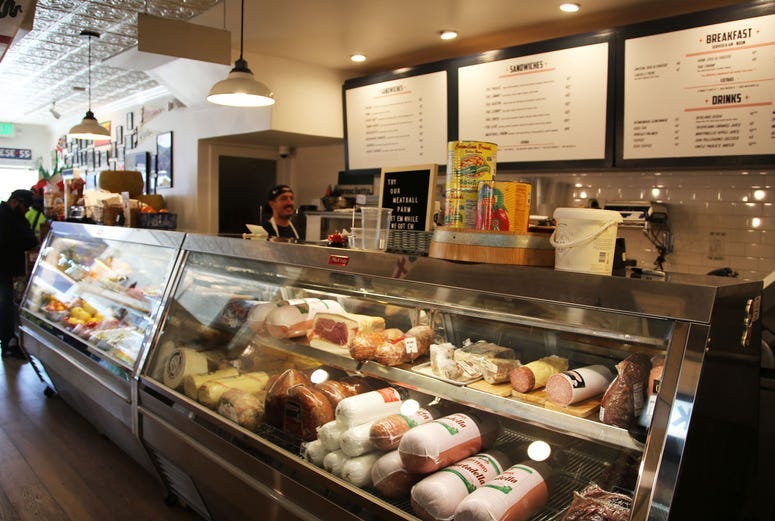 While visiting I experienced everything Paul said he wanted for his business. He doesn’t look at the folks who come into his deli as just numbers on an order ticket, they’re friends and family. He opened the deli so folks from around the neighborhood had a place to gather and of course enjoy a sandwich and some potato salad. While chatting with Paul for a few minutes, a few customers came in and he welcomed each one of them with a fist bump and a greeting you’d get from one of your friends, not the local deli owner. He alluded to Canter’s Deli owner, Alan Canter, and how he was always there working and greeting his customers. It sucks to call that kind of passion “old school” but it really is, it’s such an admirable quality in a shop owner. 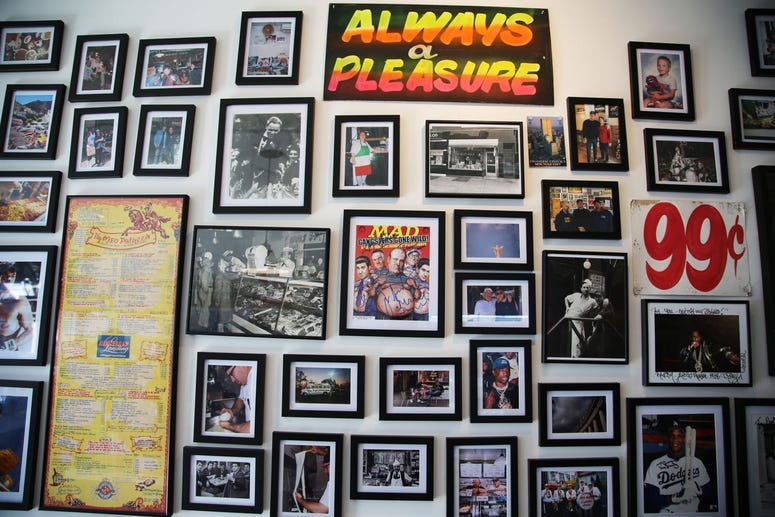 Like any other Italian deli, Uncle Paulie’s, serves cold cuts and cheese by the pound. Paul’s deli case is always stocked with peppers, olives, wheels of cheese and logs of cured meat. The food quality, attention to detail and the in-house creations are what truly separate Uncle Paulie’s from your run of the mill deli. Paul makes Mozzarella in house every day. While most delis are using Boar’s Head, Paul uses meat suppliers from here in California.  His bread comes from Normandie Bakery, just off of Jefferson in the Baldwin Hills area. Uncle Paulie’s gives us a New York style eatery with elements found right here in LA. 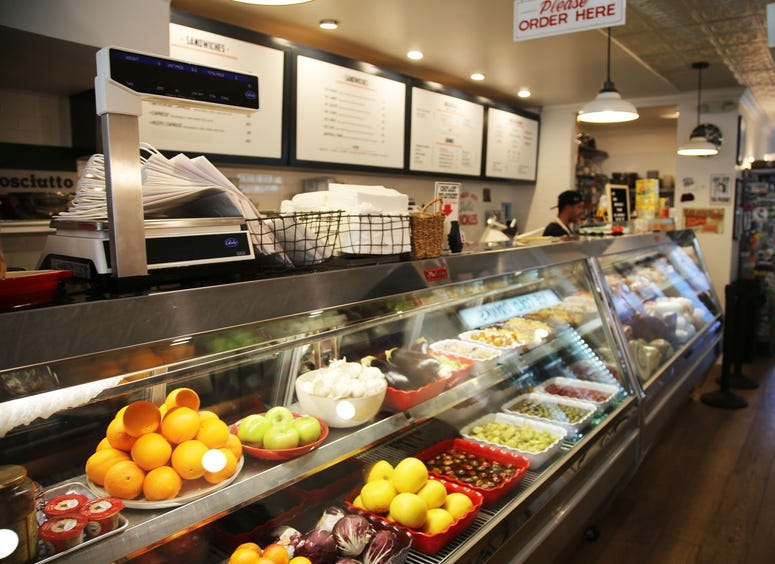 I’m sure by now you’re asking, what about the damn sandwiches Harris!

And then, there’s the sandwiches. I like to gauge my sandwich shop on how well they do an Italian Sandwich.  If you can’t get that right, then what the hell are you even doing? Everything about Uncle Paulie’s Italian is perfect. The Italian cold cuts, the aged Provolone cheese, roasted red peppers, iceberg lettuce, onion and oil & vinegar all combined for a totally balanced sandwich. The fat from the meat and cheese totally counterbalanced the acidity from the peppers and vinegar. The crazy thing is, even with the flavors perfectly balanced, everything was still so very bold. I feel like most delis think the cheese is more important as a mouth feel, but Uncle Paulie’s aged Provolone wants you to know it’s there to be savored. The smoky flavor made itself known amongst the generously sliced cold cuts. This Italian sandwich is worth the drive, no matter where you’re coming from. 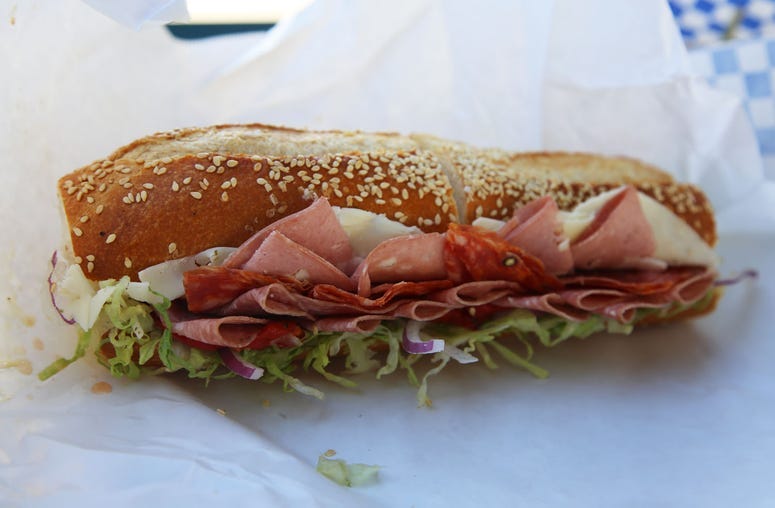 If you’ve read any of my other articles, you know how keen I am on taking the chef’s recommendations. This trip was no different, Paul did not have to beg us to try the Meatball Parm. Labeled as a seasonal item on the menu, the Meatball Parm showcases his house made meatballs, freshly made Mozzarella and grated Parmesan. As soon as this sandwich was presented to our table, we all sat that there with our jaws wide open. From first bite to the last, this sandwich is so satisfying. The bread is so important, it holds everything together; the saucy meatballs and huge chunks of Mozzarella would make this sandwich a task to eat. The bread crust kept its crisp and the inside never got too soggy. The meatballs were tasty and spaced perfectly throughout the sandwich so you didn’t get that awkward bite. The Mozzarella was smooth and milky and provided the perfect counter to the meatball. It’s such a beautiful looking sandwich and equally delicious. 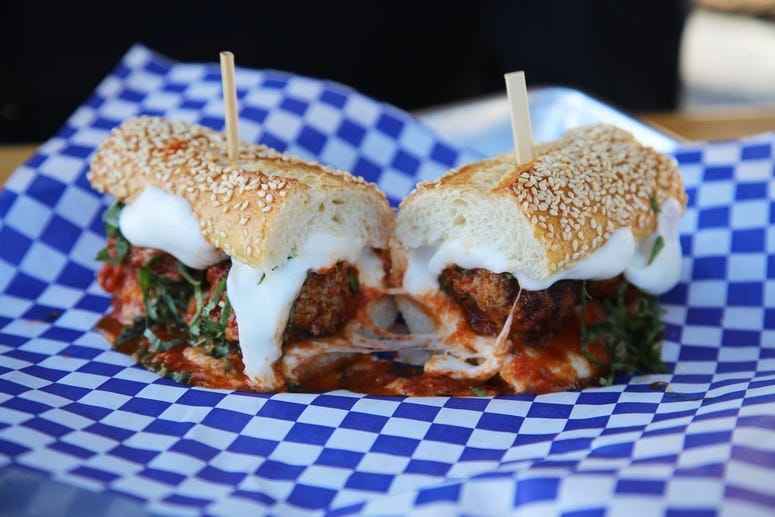 For those of us who enjoy a nice dessert after a hearty sandwich, Uncle Paulie’s has a nice selection of sweets. Strategically placed near the cashier you’ll find neatly stacked containers of NY style cheesecake in the refrigerated case and cookies, brownies and rice crispy treats on the counter begging you to grab one while you pay for your food. The cheesecake recipe belongs to an employee’s mother and he makes it for the deli. The cream cheese is so smooth and delicate while the graham cracker crust is thick, crumbly and buttered but just when think it doesn’t get any better, bam! Chocolate chips at the bottom. Enough said. 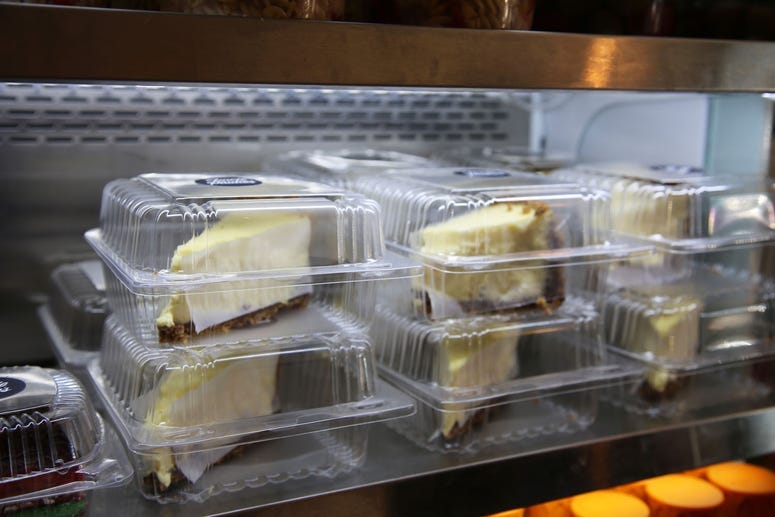 There’s a close relationship between Uncle Paulie’s and street wear culture. Located less than a mile from the street wear Mecca, the Fairfax District, Uncle Paulie’s is frequented by icons from that world. Celebrities, chefs and celebrity chefs like James Caan, Matty Matheson, Action Bronson and Adam Perry Lang all have their pictures on the wall.  Being that the deli is so intertwined in that world, it would be wrong for Uncle Paulie’s not to have great merchandise. They cover all of the street wear staples; they have snap back caps, hoodies and long sleeve tees. 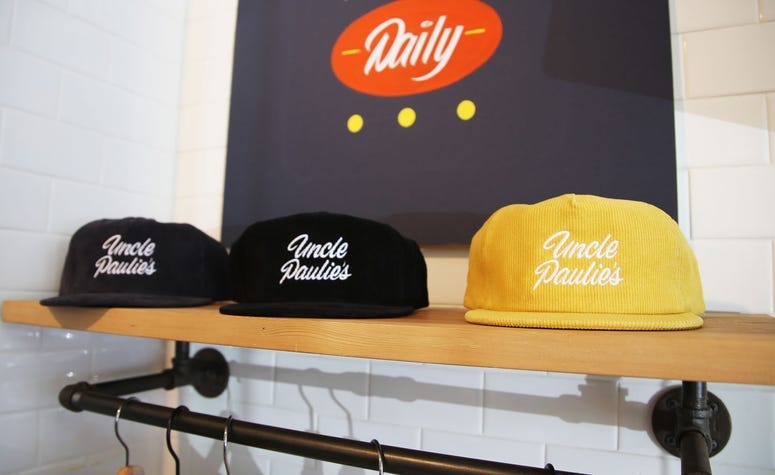 Although Uncle Paulie’s is styled after a New York deli, it represents everything that is cool about LA food. These new restaurant owners are taking it back to their roots by choosing to serve quality food instead of getting folks in and out quickly by cutting corners. Paul and other new owners are taking it back to providing old school style costumer service, making classic foods with fresh and exciting ingredients all while staying true to themselves, their hometowns and their new adopted LA home. I want to thank Paul and his staff for the hospitality and delicious sandwiches. Make sure you check them out when you’re in the Mid-City area.