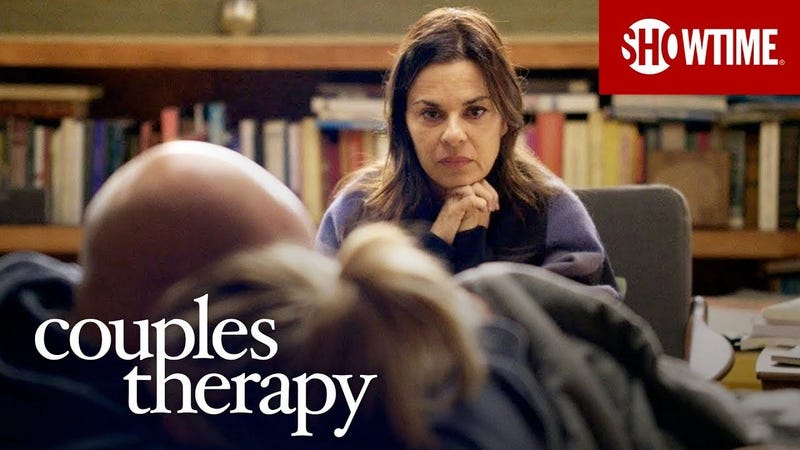 Every Thursday morning Jensen brings our attention to something that we may not know about yet or something we may have overlooked.

This week Jensen gets us up on the fascinating new SHOWTIME docu-series, Couples Therapy. It’s exactly as advertised in the title, you watch as four couples undergo couples therapy with professional therapist Dr. Orna Guralnik. Dr. Guralnik has been practicing therapy for 25 years and while she may seem unremarkable or ordinary, every once in a while she will turn in a way that reveals a distinctive tattoo and you get the impression that Dr. Guralnik has seen and been through some serious stuff.

Couples Therapy allows the viewers to be a fly on the wall for four different couples. Each couple varies in ethnicity, length of their marriages, marital problems, and much more. These therapy sessions were filmed over a period of twenty weeks. There are times where you feel bad for watching these invasive and deeply personal conversations, but it makes for very compelling TV. This is one of the first-ever looks into private therapy sessions with candid observations of tension and analysis.

One of the couples featured is Evelyn and Alan, who are dealing with trust issues. Alan seems to hide his interactions with other women from his wife; he calls them innocent, even though he’s hanging out with these women at bars. There’s the complex couple Annie and Mao, whose sessions revolve around sexual compatibility, which may shine a light into much deeper problems. Aluren and Sarah are a queer trans couple that are dealing with conflicting timelines about when to have a child. Finally, there’s Deshaun and Elaine, who bicker constantly and have built up so much spite over the years that it is now turning into something greater.

Nothing feels staged and the participants don’t seem to change for the cameras. We watch the four couples for twenty weeks and observe many changes from when we first meet them. Outside of a few silent B-Roll shots of the couples at home, you only ever see the couples in the waiting room and the office. It’s shot cinematically, and it visually resembles The Hills more than Taxicab Confessions. At some point everyone has been in a relationship with issues like one of these couples is experiencing, so it’s easy to relate. The producers claim 1,000 couples applied and were inspired by the possibility that sharing their stories would help others.

There will be nine episodes in this docuseries and a new episode will debut every Friday night at 10:00 pm on SHOWTIME. If it’s not part of your TV package, you can also subscribe to the SHOWTIME app and stream it online. You know you’ve always wanted to see and hear what goes on behind the closed doors of a couple’s therapy session, now you have the chance to actually do it. What more does Jensen have to say to get you to watch this?