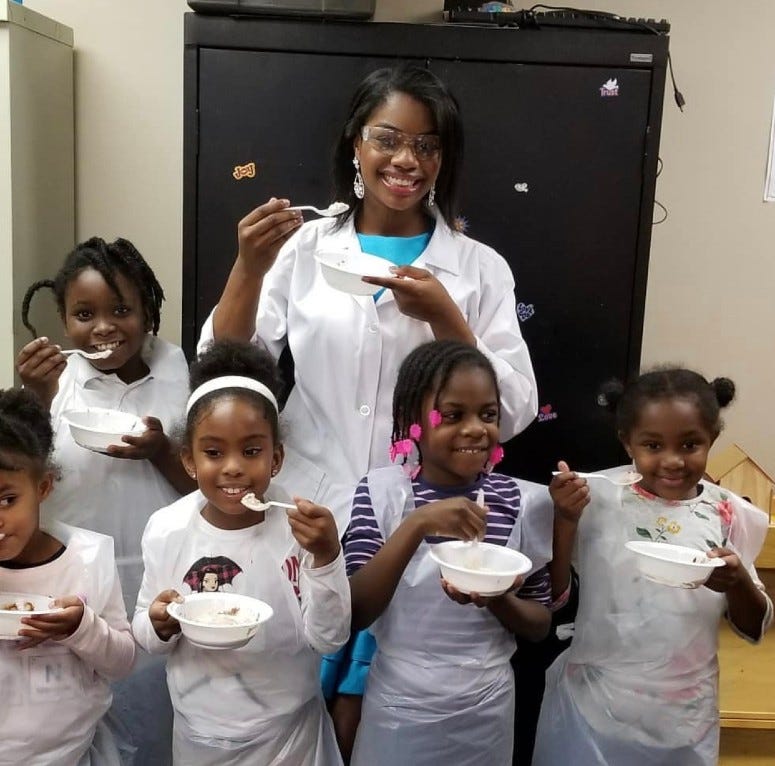 PHILADELPHIA (KYW Newsradio) — Jacqueline Means is the queen of STEM.

"I have this passion and this love for science and it started when I was around 7 years old," she said.

Raised in the Southwark section of Wilmington, Delaware where violence and crime are common, Means and her older brother were rarely allowed to play outside.

She quickly became bored with television and books, and with a curious mind, was always looking for entertainment. When her older brother put together a paper-mache volcano for a science project, he put in baking soda and it blew up.

"It was popping and bubbling and fizzing," she recalled, "and I said, 'Mommy, whatever that is, I want to do more of that,'"

But when she told her girlfriends about it at school, they weren't as excited as she was.

At 12, with her mom's help, Means decided to create an event where girls could get hands-on experience doing science projects.

That's when the Wilmington Urban Stem Initiative was born.

"I wanted to encourage girls to see that STEM is fun through hands-on experiences," she explained.

The event kicked off four years ago with 50 girls. It included inspirational women speakers and free STEM-focused workshops where the girls could create their own projects.

"From making dry ice, ice cream to elephant toothpaste to slime," said Means. "Hands-on experience was what a lot of girls were missing. Just see with their own hands or their own eyes that STEM is cool."

The entire effort was self-funded.

"I did bake sales at my school," she said. "My mom even had to forgo her car payment a couple of times. We never wanted to turn girls away."

Fast forward a few years, and the 17-year-old is now a senior at the Delaware Military Academy, where she is excelling — she's a commanding officer, captain of the track team and chess club, and more.

"There are all of these opportunities that are being put in front of me," said Means, "and I just want to take advantage of every single one of them.

"I was able to give away laptops," she said. "I gave away books and I gave away chemistry kits. I was so happy to get funding because for the past 3.5 years, it's just been me and my mom."

Means says her mother's selflessness kept her going, along with her own personal desire to awaken a love of science in the hearts and minds of young girls.

The future neurosurgeon hopes to attend Johns Hopkins University in the fall and plans to keep WUSI going at least until she graduates.

"I think the work I am doing is important and needed," she said. "You can't be what you can't see."

Means' dream is to go on to medical school after college and to continue to serve as an example to girls, changing the game by exposing girls to STEM.

Gamechangers is led by KYW Newsradio's community affairs reporter Cherri Gregg. It recognizes 10 individuals or organizations that are making a positive impact on communities of color.
For a full list of 2020’s Gamechangers, check back here. One honoree will be announced each weekday between Feb. 10 and 21. The awards ceremony takes place on Feb. 27 at The Met Philadelphia.