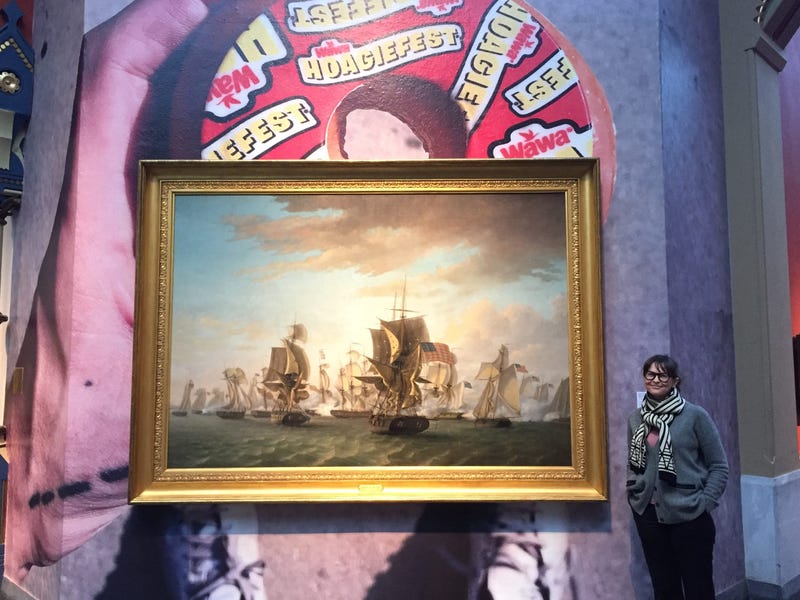 PHILADELPHIA (KYW Newsradio) — When you walk into the Pennsylvania Academy of the Fine Arts on Broad Street, the majestic staircase and stunning works of art take your breath away. And with this current exhibit, "Ancient History of the Distant Future," you are going to see some things that you have never seen before, at least not together.

"Alex da Corte created two commissions for us as part of this exhibition. He did a large scale image of him holding a doughnut from Wawa, which is advertising Hoagiefest, layered on the wall behind a painting by Thomas Birch," explained contemporary curator Jodi Throckmorton.

"The Thomas Birch painting is of the battle of the War of 1812," she continued. "That war opened up global trade routes to the United States, so it helps us think about how corporations are 200 years later and how far we have come, both good and bad."

This is the latest groundbreaking exhibit at the Academy.

"There is an assumption that nothing changes in this landmark building," Throckmorton said. "People think if you have been here once you have seen it all. Not true. We are constantly changing things out and switching things up. "

Just think, would you ever expect to walk in and see a picture of a doughnut advertising Hoagiefest?