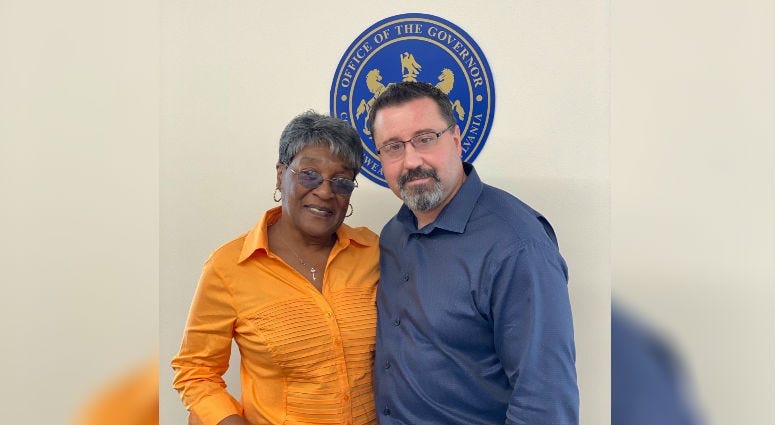 George Trudel and Naomi Blount served a combined 68 years behind bars before having their sentences commuted earlier this year by Gov. Tom Wolf.

"It is really a but surreal, but in the same fashion, it just feels right," said 53-year-old Trudel.

But he did not take a life. In fact, his co-defendant, who actually did the killing, only served seven years in prison for third-degree murder.

"I was represented by a public defender and only spoke to him for 40 minutes," recalled Trudel. "The judge said his hands were tied because the law gave him no discretion."

While in prison, Trudel went to college and studied criminal justice. He did administrative work on the inside and even helped some women lifers file commutation applications.

"It is actually something I know very well, and it's just a comfortable fit, it just feels right," he said. "My education changed my life in prison, and I know I have been blessed and I without question am paying that forward."

As a commutation specialist, Trudel will travel to the prisons across Pennsylvania and meet with inmates. He'll help determine which ones could be eligible for sentence commutation and then help them through the process.

A former blues singer, Blount did 37 years of a mandatory life without parole sentence for a 1982 incident where a man stabbed her female friend.

The two women retaliated, with Blount hitting the man on the head and her friend stabbing the man. The man eventually died from the stabbing. And while Blount, based on the evidence, was exonerated of the actual killing, she and her co-defendant both received life sentences.

Blount applied for a shortened sentence five times before the pardon board recommended her for commutation.

Now, she'll help other women through the process.

"Now that I have the opportunity to be on this side of the fence," she said, "there's no way I will forget where I came from. I'm so glad I can give back and give the hope that they so, so long for."

"We need to make sure that we give everyone an opportunity to get a second chance," said Fetterman, who made the historic hires.

The duo will join Brandon Flood, who was appointed secretary of the Board of Pardons. Flood served nine years before getting a pardon from the governor and is tasked with reforming the pardons process. Now, Trudel and Blount will help remake commutations.

"The vision is to do audit of sorts of our entire lifer population, which numbers of 5,000," said Fetterman. "Who better to assist in the process to help other inmates get their applications in and determine the suitability than George and Naomi."

Fetterman says the Board of Pardons has streamlined the commutations process to help better administer justice. The board is expediting review for the more than 700 lifers who are age 65 or older.

It can cost the state more than $70,000 a year to house an elderly inmate serving life.

"We want to make sure that no one is condemned to die in prison that, in the interest of justice, would be better served by living on the outside and contributing in a manner like George and Naomi are," added Fetterman.