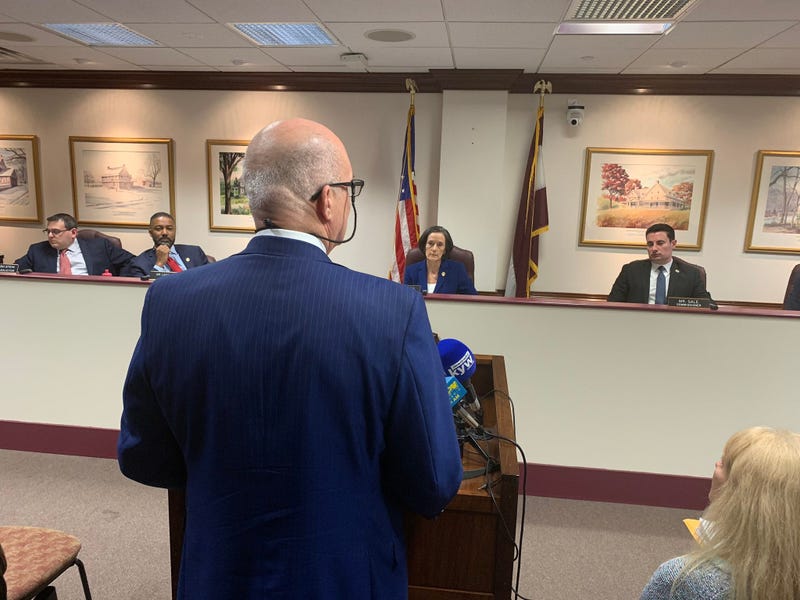 NORRISTOWN, Pa. (KYW Newsradio) — One week after the top two lawyers in the Montgomery County Public Defenders’ Office were fired, more than 100 people rallied on the courthouse steps while dozens of others waited hours to address county commissioners.

Lawyers and other advocates blasted the Montgomery County Board of Commissioners for the firings of chief public defender Dean Beer and his second in command, Keisha Hudson.

“Please reconsider your decision that constitutes a poisonous spear that has been thrust deep in the heart of our criminal justice system,” said longtime Norristown defense attorney Jack McMahon.

He told the commissioners that Beer and Hudson have taken significant steps to try to level what he describes as a very uneven playing field for indigent citizens or people of color.

Long time defense attorney John McMahon leads long list of speakers @MontcoPA addressing the firings of chief public defender Dean Beer and his 1st in command Kiesha Hudson. “You have sent a clear message, this is a violation of your oaths.” @KYWNewsradio pic.twitter.com/dqbb9ObKJh

After the public comment, Val Arkoosh, chair of the Board of Commissioners, announced they were looking into whether they can make the Public Defenders’ Office independent.

“Here in Pennsylvania, we are the last state in the country that continues to fund public defenders through county government,” she said. “It is abundantly clear from all the many, many voices we heard today that this is not an optimal arrangement.”

Commissioner Ken Lawrence stopped short of making any motion, but he did say there needs to be “reconciliation and mediation” and a conversation about the role of the Public Defenders’ Office.

“There needs to be protections in place to protect some of that independence. Dean Beer and Keisha Hudson have something to offer to that process,” he said.

Others from across the Philadelphia region called the firings chilling, saying the commissioners have effectively cut the legs out from under the lawyers in the office.

Carrie Allman with Montco public defenders office urges @MontcoPA commissioners to reinstate Dean Beer and Kiesha Hudson. She says she never had doubts about her job until she saw Beer marched out by security. “I walked out with him b/c it wasn’t fair for him to walk out alone.” pic.twitter.com/cMRNJSLoYx

A letter from the county’s chief operating officer to Beer, sent days before the firing, said the county supports his work for criminal justice reform, but county officials were repeatedly at odds with the way he was working toward those goals.