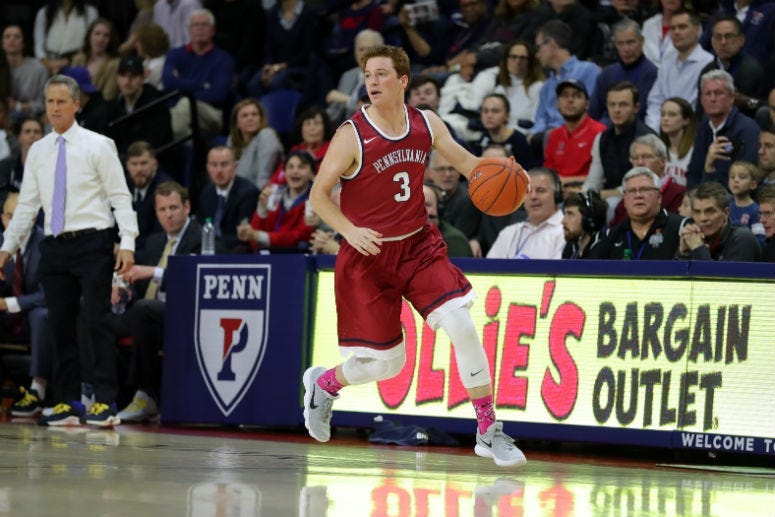 PHILADELPHIA (KYW Newsradio) — It's been quite a last season and a half for the University of Pennsylvania men's basketball team.

Last season saw the Quakers win the Ivy League and head to the NCAA Tournament for the first time since 2007. So far this season, Penn has notched impressive road wins over Atlantic 10 leader George Mason University and the University of New Mexico. At the Palestra, Penn has upset defending national champion Villanova and beaten Miami out of the ACC.

That win over Villanova was just one piece of a fantastic run the Quakers have now completed in City Series action this season. When Penn beat Saint Joseph's University at the Palestra this past Saturday, 78-70 the Quakers earned their first outright Big 5 title since the 2001-2002 season.

"To go out there and compete with those four other programs and come out on top at 4-0, it's a great accomplishment," Penn head coach Steve Donahue said. "It's during the season so you can't relish in it, but I think it is something that those guys will look back (on), that very few Penn players have done. They won a Big 5 title."

One of the real impressive things about the Quakers the last couple of seasons is how, when players get an opportunity, regardless of how much or how little they have played to that point, they almost always come through. One of the best examples of this is senior guard Jake Silpe. After playing extensively as a freshman, he saw his time on the floor decline significantly as a sophomore and junior. But here as a senior, he has emerged as a critical piece of the Quakers' puzzle. In the last two games against Temple and St. Joe's, Silpe has hit six of eight threes, including late triples to help Penn ice both wins.

Another example is junior forward Kuba Mijakowski, who emerged a couple weeks ago against Temple to score 14 first-half points, including four threes. He had scored a total of 28 points in his college career prior to that.

Donahue talks about having a group that is always ready to answer the bell.

"It's a credit to the kids that we bring in, incredible families, mature and selfless," Donahue said. "I think the other thing we do as a staff is we reward kids who play well in practice. Practice isn't just trying to get the five best guys ready. If you prove daily that you're good enough to play and you're beating someone out, then you're going to get an opportunity to play in the game. I think I'm just really true to that, that this two hours every day means a whole lot, and I think we have a lot of examples of that and we're going to continue to do that. I think it makes everyone better and in particular it makes our whole team better."

While the Quakers' resume to this point this season is impressive, there is a lot of work to do in the Ivy League. Penn opened Ancient 8 play with back-to-back losses to Princeton earlier this month, so this first Ivy road weekend that the Quakers are about to embark on is critical. Penn will start things off with a Friday evening game at Cornell and follow that up on Saturday night with a visit to Columbia.

Looking at Cornell, the Big Red sit at 9-9 on the season (1-1 Ivy). Cornell is led by one of the best scorers in the country in senior guard Matt Morgan. He is averaging 23.3 points a game this season while shooting 45 percent from three. He recently became the all-time leading scorer in Cornell history and his career point total heading into the weekend sits at 2,065.

"An incredible career and I've said this to many people, I think he's the best scorer in my 28 years since I've been in the league," Donahue said. "Just an amazing guy, scores at every level, knows how to play. He's where you start."

Donahue is also impressed with the job Cornell is doing defending the perimeter as the Big Red are holding opponents to 30.3 percent shooting from three so far this season.

Columbia is 6-10 on the season (1-1 Ivy) heading into the weekend. Prior to Saturday night's game with Penn, the Lions will host Princeton on Friday night.

The Quakers' game with Columbia is an 8:00 pm tip on Saturday.