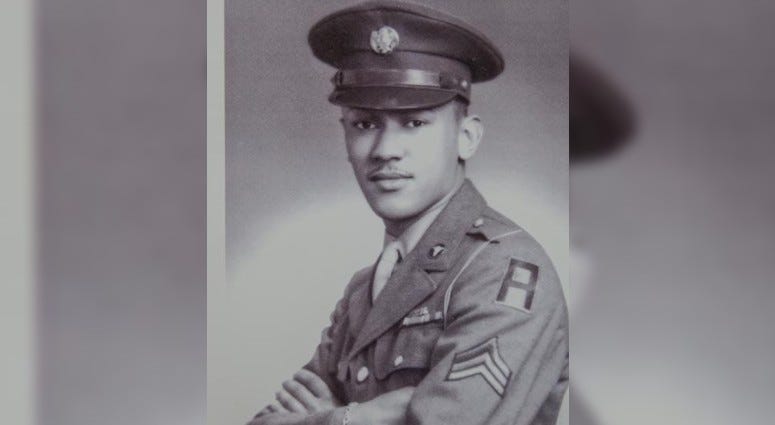 A medic in the all-Black 320th Barrage Balloon Battalion, Woodson set up a medical station on the beach. His 30-hour effort saved dozens, if not hundreds of lives.

“Despite being severely wounded, what he did on Omaha Beach is absolutely staggering,” said Sen. Pat Toomey, who is cosponsor of a bill that would award Woodson the Medal of Honor posthumously.

“He has received a Purple Heart and other honors, he deserves the Medal of Honor,” Toomey said in a Zoom call with reporters Tuesday.

The bipartisan effort has been led by Sen. Chris Van Hollen, who has been working for years to get the Overbrook graduate the recognition he deserves.

But the push to get Woodson the nation’s highest honor for military service has lasted more than seven decades.

Woodson had been recommended for the award during WWII, but no Black soldiers got the honor at the time. It was not until 1997 that seven Black service members were awarded the Medal of Honor retroactively by President Clinton.

Woodson made the short list for this but was not selected due to a lack of documentation.

Woodson’s official Army records had been destroyed, along with 80 percent of all Army records, during a fire in 1973.

“Only one percent of Army records from WWII have been retained,” said Linda Hervieux, a journalist and historian who stumbled upon Woodson’s story while doing research on another Black WWII hero.

During her work a few years ago, she found a handwritten note recommending Woodson for the medal at the Truman Library.

She also located other evidence of his heroism, including an Army press release, an article from Stars and Stripes, newspaper articles, radio interviews and more.

Despite this evidence, when Van Hollen and Black congressional lawmakers wrote the Army last year asking them to bestow the medal on Woodson, the request was denied. The reason: lack of an official record.

“I would argue there’s ample proof,” said Hervieux. “It’s for this reason I think that Mr. Woodson deserves an exception.”

“We want to have a legacy for our family,” said Joann Woodson, his widow.

They were married for 54 years and lived in Maryland.

“The time is right to do the right thing, and he deserves it,” she added.

“We’re going to work hard to get this done,” Van Hollen told those listening on the Zoom call.

He’s confident that the U.S. Senate and House will pass the legislation. As an alternative, he said the group of lawmakers will write to President Trump and ask for his support as well.

If he is awarded the Medal of Honor, he will become the eighth Black WWII veteran to receive the nation’s highest honor.