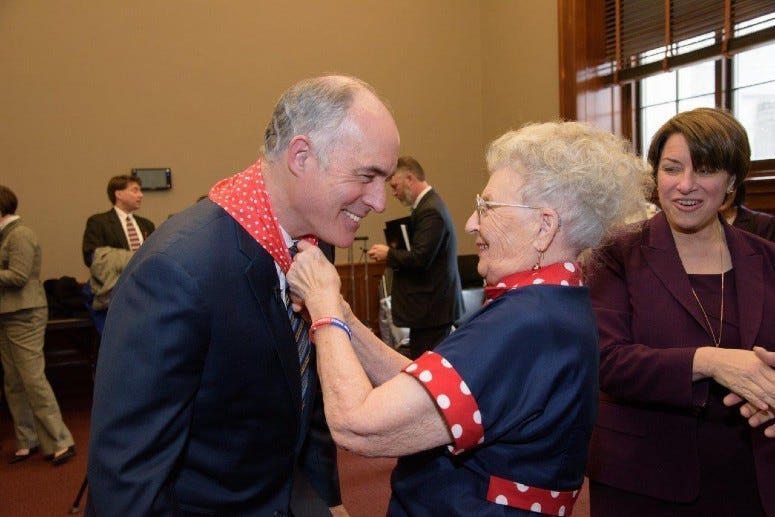 PHILADELPHIA (KYW Newsradio) — Nine million women helped run the U.S while the men were in battle during World War II. And in recent days, a bill that would give these "Rosie the Riveters" the nation’s highest civilian honor achieved a milestone in the U.S. Senate.

The Rosie the Riveter Congressional Gold Medal Act of 2019 now has 73 sponsors in the Senate, including support of all 26 women senators.

This means after a year and a half of sitting, the bill can finally go to a vote on the Senate floor.

“We’re just grateful we’re at a point we can move this forward,” said Sen. Bob Casey (D-Pa), the lead sponsor on the S892.

“The contributions that these women made to World War II has never been adequately recognized,” he said. “We’re talking about millions of women who helped support our troops.”

During WWII, women came out of the home to run the farms and businesses. They built bombers and helped make weapons in a never before or again seen display of solidarity during the nation’s time of need.

“Nobody can take away our pride of how we felt about what we did for our country,” said Mae Krier. “I’m just so proud of what we did and how we did it.”

Krier was a teen when she worked on B-17s and B-29 war planes at a Boeing factory during the war.

She was in her 60s when she began fighting to get Rosie the Riveters the nation’s high honor. At 94, she was gleeful to learn they’re one step close to finally being recognized.

“I’m a mess today, I am so excited,” said Krier, who made the announcement on Facebook. “It’s just amazing what you can do if you don’t give up and are determined.”

“My mother was a Rosie,” said Gregory Cooke. “She has since transitioned and I am her son pushing for their recognition. It is long overdue.”

Cooke, who produced the documentary “Invisible Warriors: African American Women of WWII” — which is about the 600,000 Black Rosie the Riveters left out of history — attributed the current milestone to the tenaciousness of Krier.

“She was relentless,” he said, but noted that time is of the essence. “All of these women are in their 90s and some are over 100. It would be nice for them to be able to attend the ceremony and be honored while they are still here.”

The U.S. House passed the bill last November. Casey said the Senate could take up the vote on its bill in coming weeks and that the bill could pass this year.