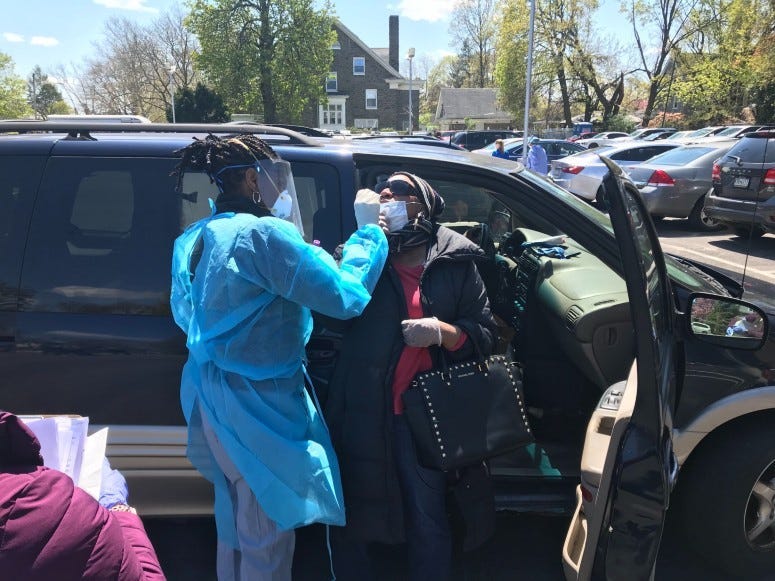 PHILADELPHIA (KYW Newsradio) — The group of Philadelphia medical professionals formed earlier this month to provide free testing for populations at high risk for COVID-19 has reached a fundraising milestone. But more money is needed.

It’s been 14 days since the Black Doctors COVID-19 Consortium started a GoFundMe effort online to pay for PPE and testing supplies. Their initial goal was $100,000, and as of Wednesday, they surpassed the goal by nearly $20,000.

“The money is being spent for vans, PPE, and at some point, I would like to pay people who are out here 14, 16 hours a day,” Dr. Ala Stanford, who started the consortium earlier this month, told MSNBC on Monday.

She launched the consortium when it became clear that African-Americans are dying of COVID-19 at disproportionate rates in areas like Chicago, Detroit, New Orleans and Philadelphia.

She pulled together black doctors, nurses and other medical professionals who all donated their time and pooled their resources.

Stanford leveraged the relationship that her company, Real Concierge Medicine, had with LabCorp to get testing supplies.

The group also used their personal connections to get tests, PPE, and other necessary items when the government provided little to no support.

Black churches, like Enon Tabernacle Church, Pinn Memorial Baptist Church, and others, partnered with the consortium, providing resources and space for free testing. And money began coming in from individuals, with some donations as small as $10.

“We saw it online and was like, yo, we gotta help them,” said Anton Moore, who runs Unity in the Community, an anti-violence nonprofit based in South Philadelphia. “Because I’ve seen people die from this. I know people who caught the COVID-19, I have family members who have it and I know we have to get tested.”

Moore said Unity in the Community raised $17,000 to contribute to the consotium's GoFundMe.

And on Tuesday, the consortium provided free testing at Yesha Ministries on Snyder Avenue, where 325 people got tested, with lines wrapping around the corner the entire day.

“I couldn’t find a free testing site up there,” said Carla, who drove down from Rhawnhurst. “So I came down. I actually haven’t been feeling well and I’d rather just rule it out.”

So far, the consortium has tested 1,600 people at five testing sites over the course of just two weeks.