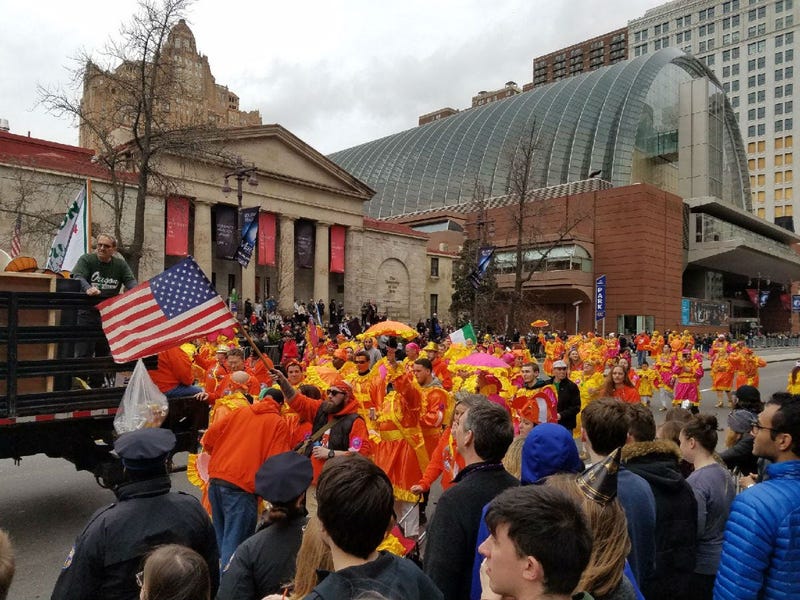 PHILADELPHIA (KYW Newsradio) — Outrage over a Mummers Parade skit featuring a caricature of Jay-Z walking a mummer dressed as Mayor Jim Kenney on all fours continues, even though the mummers got approval from the city.

The skit featured a dark-skinned, gold-chained wearing mummer with the word "Jay-Z" written in big white letters on a black hat and black jacket, leading a long-nosed mummer on all fours with a leash, who wore a jacket with big letters that said "Mayor Kenney."

Kenney received backlash over the summer after Jay-Z's Made in America festival was unexpectedly given the boot from its usual Benjamin Franklin Parkway venue, but the matter was later resolved as a miscommunication.

"My response was that this was blackface," said Abdul-Aliy Muhammad, co-founder of the Black and Brown Workers Cooperative. He joined many others, including Philadelphia City Council President Darrell Clarke, who initially condemned the skit as racist, with the understanding that the Jay-Z character was a non-black person in blackface.

In response, the BBWC and a coalition of groups began organizing a protest, but it turns out Jay-Z was played by an African-American man.

"This is typical of white people, who think that using a black person will help them avoid being called out for what this, in fact, is," said Muhammad. "It still has the same cultural impact as a white person in blackface."

Much more work to do to make sure all Philadelphians feel welcomed and included in the city's biggest New Year’s Day celebration. https://t.co/bxR7JCrPJR

The City of Philadelphia issued a statement saying the Finnegan's New Year's Brigade submitted its concept in advance of the parade, informing the city that the Jay-Z character would be played by an African-American.

Muhammad said given the parade's history of racist parody, there is still plan to protest the city funding the parade.

"The Mummers Parade is not for everyone," he said. "This should not be happening at all."

Mummers' use of blackface has been banned for decades.

The Finnegan Club, which took heat in 2016 for a parody of Caitlyn Jenner, did not respond to request for comment.