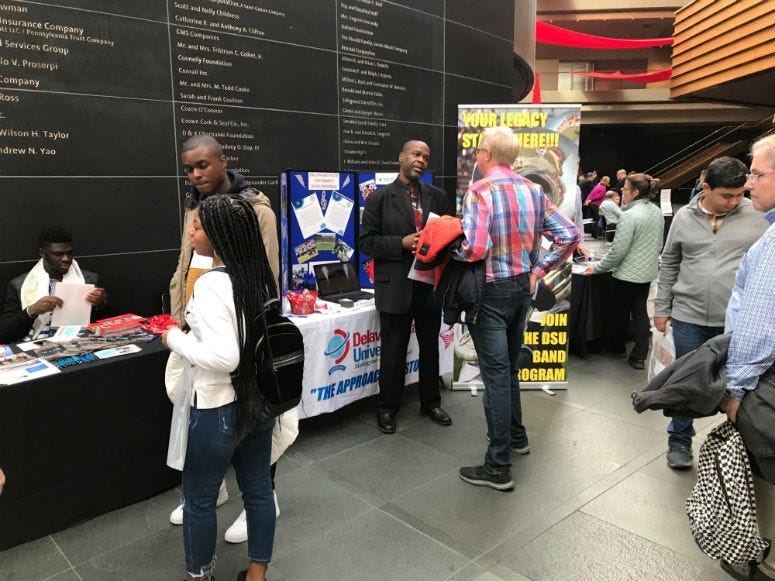 PHILADELPHIA (KYW Newsradio) — The Kimmel Center for the Performing Arts was host to a free college fair Monday designed specifically for students with an interest in careers in music.

Nearly 400 students from all over the region explored tables at the Kimmel Center with information for roughly 50 college music programs from 18 states.

"They're conservatories here. Some of the top conservatories, Juilliard and Curtis, Cleveland Institute of Music, they are all here," said Joseph Conyers, principal bassist for the Philadelphia Orchestra.

After playing in an orchestra concert in Seoul, Korea Sunday night, he flew back to put on his other hats — music director for the Philadelphia All City Orchestra and founder of Project 440, which engages young musicians by providing them with the career and life skills and happens to be the nonprofit that organized the College Fair for Musicians.

He said the goal is to show students the various careers available in music and how they can get started.

"Students can learn more about scholarships, specific scholarships and they can learn about essay writing," said Conyers. "And one of the neat components we added this year is career speed dating."

"I am hoping to be a vocal performance major," said Emily Hoffman, a high school senior. She and her family traveled from Connecticut to look at local colleges and for this unique college fair, said dad Eugene.

"We've learned what music means to a lot of people as well as what you can do in music as a career," he said. "This has been great."

"I want to get to know more about the school and audition requirements," said Gevon Goddard, a senior at Franklin Learning Center. A cellist in the All City Youth Orchestra, he said he plans to study music education, and the college fair has helped tremendously.

"I've been coming since I was a freshman," he said. "I guess you could say the first two years I came for the raffle, but the last two years I have been focused on which colleges are for me."

For Conyers, the day is like Project 440, which teaches kids that playing music can expand horizons.

"This is about using music as a tool or the lens for young people to see what the possibilities in life are," he added.