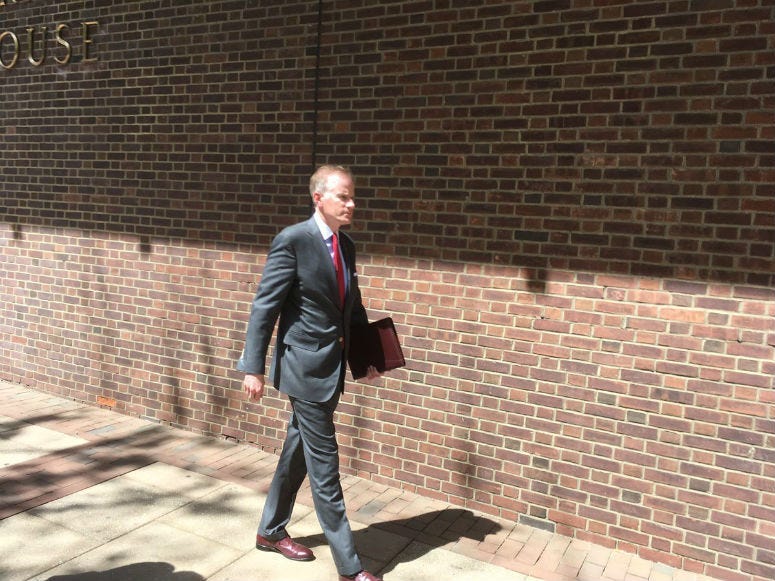 PHILADELPHIA (KYW Newsradio) — Less than a week before his corruption re-trial was to start, there was a hastily called proceeding for former Philadelphia Sheriff John Green, during which he pleaded guilty to "conspiracy to commit honest services fraud."

The plea arrangement came together at the last moment, so much so that his defense lawyer, Peter Scuderi, was excused for appearing in court wearing a casual grey pullover sport jersey, chinos and boat shoes.

"The offer the government made was a fair resolution," Scuderi said.

During Green's first trial in 2018, jurors acquitted him of three of the charges; they were deadlocked, and could not decide the other two.

"It was not a clear case for the government. And I think that was reflected in the verdict, the first time around," Scuderi added.

"He sold his office for an enormous stream of undisclosed and illegal benefits," U.S. Attorney Bill McSwain said.

At the same six-week long trial, his co-defendant, businessman James Davis, was found guilty of conspiracy and fraud. The jury also acquitted Davis on two counts and deadlocked on another count.

Davis was sentenced to 10 years in prison.

Assistant U.S. Attorney Christopher Diviniy went through the basic facts in the case, detailing how Green diverted public contracts to companies owned by Davis, who returned the favor with what he called a "complex bribery and kickback scheme."

For a moment, when Judge Wendy Beetlestone asked Green "is that what happened?," Scuderi responded "there are facts that support a guilty plea." Judge Beetlestone shot back, "that's not good enough. I need your client to say he did what the government described. I don't think I can proceed otherwise."

Green then responded "Yes, your honor, I am guilty. I have betrayed the confidence that the citizens of Philadelphia had in me."

Beetlestone will sentence Green Aug. 1. He faces a maximum of five years in prison and a $250,000 fine.