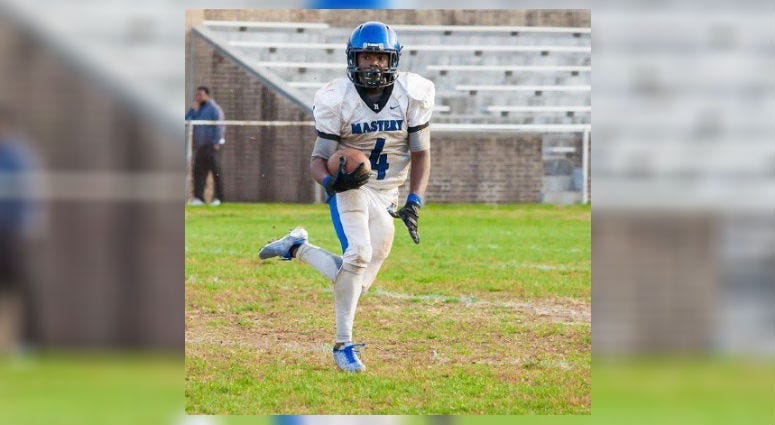 PHILADELPHIA (KYW Newsradio) — A star football player at Mastery Charter School will be laid to rest Thursday after the 18-year-old was tragically shot and killed on Sunday.

Suhail Gillard was popular among the seniors at Mastery's Lenfest Campus in Old City. He was three-time all public player. He was headed to the all-star game this winter and led the team to a championship win last year.

He had a bright future on a college team ahead of him.

"Just a hard worker, man. It's a shame. Just a really good kid, special kid," said John Lay, a teacher at the school who taught Gillard in seventh grade. He's also one of Gillard's football coaches.

"Agent 4," as Gillard is called because of his effectiveness on the field, was a leader who inspired other players to work hard.

They held a vigil just a few hundred feet from where Suhail would have graduated at the Seaport Museum in May.

"We did a balloon release in memory of Suhail. It was a simple, just a gesture," said Chris Ziemba, the school's principal. "We need to continue the process of mourning and healing as a community."

Sad story today - as students from #MasteryLenfest held a vigil for #SunhailGillard. The football star was shot Sunday. His twin brother has been charged with murder. No details on circumstances. Suhail will be laid to rest Thurs. More on this remarkable teen on @KYWNewsradio. pic.twitter.com/vg5fbNCfKX

He is now charged with murder, gun possession and other crimes. No other details about the circumstances of the shooting have been released.

"When I heard, I was shocked. It was disbelief," said John Davidson, the head coach of the Lenfest Campus football team.

He went to the hospital Sunday night.

"It was a dark moment. It's definitely a tragedy," Davidson added.

Condolences on the loss of Gillard were all over social media.

It’s with grieving hearts that we inform you of the untimely passing of our beloved brother, Suhail Gillard. He was the most respected and hardest worker Mastery ever had the honor and privilege to put a jersey on. Rest well #Agent4-- 4ever. pic.twitter.com/GYsAxZ3PHH

RIP @gillard_suhail ------,someone took away a great kid and athlete, please keep his twin brother, family, coaches and teammates in your prayers. #Agent4 pic.twitter.com/TGrL6GUkBG

Davidson said Suhail had at least one offer to attend college, and others were recruiting him. He played receiver and running back, could play offense and defense, and was the "motor" of the team's offense.

His coaches say he worked in the gym and grew over the years he played. Davidson said this year he rushed for 1,700 yards and returned an interception for a touchdown during the championship game.

"He was a magnet," said Davidson. "He was mentor and would make kids laugh."

Davidson said the team is praying for Gillard's mother and the entire family. Many from the school are planning to attend Gillard's funeral in West Philadelphia on Thursday at 11 a.m. to support the Gillard family.