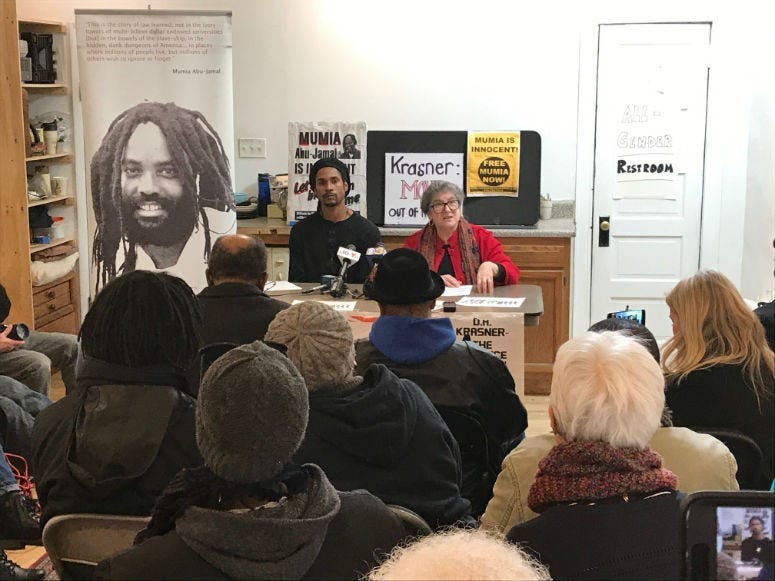 PHILADELPHIA (KYW Newsradio) — The Philadelphia Common Pleas judge that opened the door for a partial appeal in the Mumia Abu-Jamal case is retaining jurisdiction. Earlier this month, the District Attorney's Office alerted the court of newly discovered case files. Jamal supporters met in West Philadelphia and are energized.

It's been nearly two years since Jamal sought an appeal under a U.S. Supreme Court decision ruling that conflicts of interest could force high court judges to recuse themselves from cases they worked on as prosecutors. On Dec. 27, Judge Leon Tucker ruled in part in Jamal's favor because of possible conflicts of interest posed by retired Pennsylvania Supreme Court Justice and former DA Ronald Castille.

For well over a year, the DA's office represented to the court that they produced all files related to the case that would shed light on Castille's involvement as DA.  But on Dec. 28, 2018, the DA's office found six boxes in a "largely inaccessible room" in the office marked "storage."

"It's a big deal," says Rachel Wolkenstein, an attorney who represented Jamal in post conviction appeals during the 1990s. According to the DA's office, the six boxes were not listed in their office's database.

"These files should be released to the public," she said. "They are proof of the cover up of the frame up. They are confirmation of what we've known for decades: that there's a cover up of exculpatory evidence in Mumia's case."

Tucker issued an order Monday saying he will review the case. DA spokesman Ben Waxman said in an email that the DA's office will make the files available to Jamal's attorneys. No word yet on what is in the file, but Jamal's supporters say they plan to pressure DA Krasner to not appeal Tucker's ruling.

"We demand Mumia's freedom now," said Wolkenstein, "it's time to dismiss the charges."

The DA's office says it is reviewing Tucker's Dec. 27 decision.

Jamal was convicted of the 1981 killing of Philadelphia Police Officer Daniel Faulkner. His widow, Maureen Faulkner, has appeared in recent hearings related to Jamal's latest attempt to appeal.

She expressed outrage at Tucker's decision.