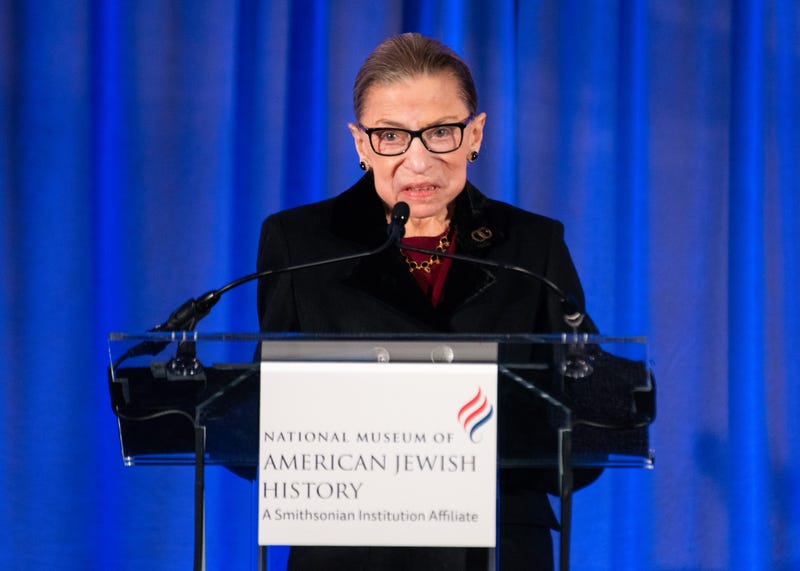 PHILADELPHIA (KYW Newsradio) — U.S. Supreme Court Associate Justice Ruth Bader Ginsburg was honored in Philadelphia Thursday night, where she was inducted into the National Museum of American Jewish History’s Only in America Hall of Fame.
Unsurprisingly, hundreds waiting patiently to get a seat at the sold-out event to witness the trail-blazing jurist in-person.

“She led the fight in the courts for gender equality,” said Nina Totenberg, a longtime friend of Ginsburg who also covers the U.S. Supreme Court for NPR.

She described the 5-foot-one-inch legal firebrand as a woman who changed the laws that impact women's rights. But Ginsburg's impact was felt years before she was appointed to the Supreme Court by President Bill Clinton in 1993.

The former Rutgers Law professor's barrier-breaking, skillful, legal arguments helped reshape the laws that initially kept women in the home, unable to participate in commerce or pursue equal education and civil status. Her work lead the charge in ensuring that women were not viewed as inferior citizens. Once on the court, she broke barriers, writing powerful opinions and fiery dissents.

“The nickname ‘Notorious RBG’ references another Brooklynite that used words to speak truth to power,” noted Irin Carmon and Shana Knizhnik, co-authors of "Notorious RBG," which documents Ginsburg's life. They created a space online discussing her impact in 2013, which went viral.

Today, generations of RBG fans don nail art or T-shirts and buy bobbleheads with her likeness, paying homage to the adventuress and opera lover known to be tough and strong.

“What a treat this evening has been for me,” Ginsburg told the crowd in a 10-minute speech.

She linked her Jewish faith and heritage to her legal work with one word: justice.

“I hope in all the years I have the good fortune to serve on the bench on the Supreme Court of the United States, I will have the strength and the courage to remain steadfast in the service of that demand,” she said.

Ginsburg, who has beat cancer more than once, had recent health scares, but she appeared strong during her visit to Philadelphia. The 86-year-old has also gained notoriety for her skillful workouts, and she was said to have done planks in the morning before her travel.