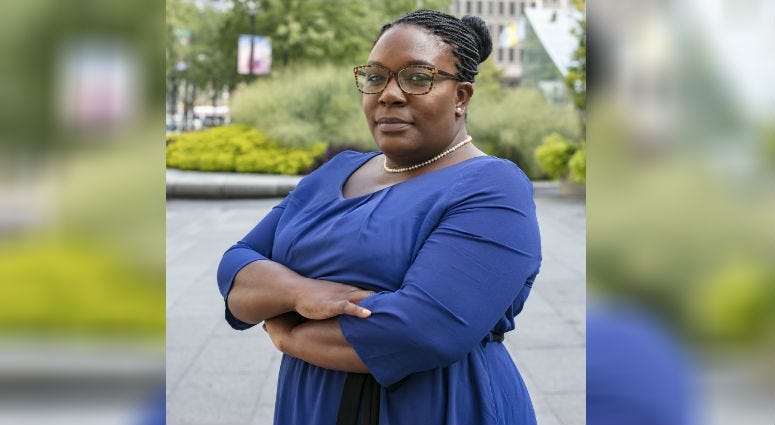 PHILADELPHIA (KYW Newsradio) — A single mother of five made history on Election Day, becoming the first third-party candidate to snag an at-large seat on Philadelphia City Council since the city created the minority party system.

"Saying we're going to make history and then actually making history, it's an amazing feeling," said Kendra Brooks, Philadelphia City Councilmember at-large elect. "This is definitely not something I wanted to do. Ask folks — I never wanted to run for office."

Brooks grew up in Nicetown and began her career as a nursing assistant and later an advocate for children with disabilities. The Community College of Philadelphia, Temple University and Eastern University graduate later became a community organizer, focusing her grassroots work on gun violence, affordable housing and better quality education.

Then, Mayor Jim Kenney appointed her to the nominating panel for the Philadelphia School Board.

"And I was like, 'Oh, this is not that bad,'" she said, noting that it was the first time she ever gave running for office a thought.

Soon after, the Working Families Party drafted Brooks to run as an independent. Their strategy was take aim at the two at-large seats reserved for the minority party that had been held by Republicans since the system was put in place in 1952.

The strategy they used? Old-school style door knocking to educate voters. It was expensive, but the method tapped into a growing anger toward the status quo.

"People felt like their votes didn't count," said Brooks. "It just seemed like the system was working against them, then here is the opportunity to do something different."

Brooks says many voters would do "straight ticket" voting, not knowing there was another way.

That's where the Working Families Party and Brooks' supporters were able to make inroads.

"You explain to them the Republicans just get in, they don't really have to run for their seats," she said. "People were really impressed with that message and it resonated and they continued to share it."

Now, Brooks will be one of four new faces on City Council.

Brooks raised more than $140,000, mostly from individual donations, and ran on a double ticket with Nicholas O'Rourke, a fellow independent supported by the Working Families Party. The duo shook up the entire minority party race, with Brooks earning 56,000 votes more than Republican David Oh, who was able to claim the second minority seat.   "And our goal was only 40,000," said Brooks. "So we exceeded our goal."

Subscribe to the Flashpoint Podcast on the Apple Podcast, RADIO.COM or others apps where you get your podcast by searching "Flashpoint KYW."