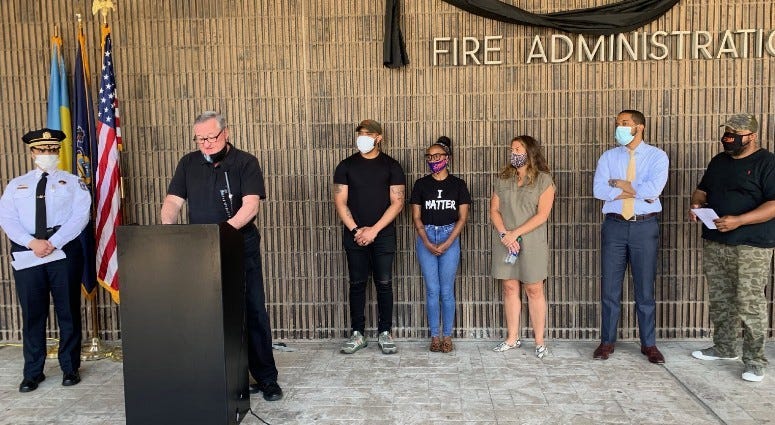 PHILADELPHIA (KYW Newsradio) — Philadelphia Mayor Jim Kenney said six days of protest in the city have led him to create a panel that he hopes will guide the city toward reconciliation. He offered no specific plan or timeline, saying the first order of business would be just to listen.

The mayor Thursday introduced three members of what he said will be a large diverse "steering committee," including nonprofit leader Sarah Ashley Andrews.

“We will hold this administration accountable and we look forward to moving this city in the right direction,” she said.

The panel was introduced following a visit the mayor made to North Philadelphia with Police Commissioner Danielle Outlaw and other officials to speak to business owners such as Christopher Selby, who has an electronics store just off Erie Avenue.

“It was something good and something different for us and I think there will be something positive, especially for this Avenue, because after that situation, we need something positive to bring everybody back because if we don't, we're going to die out here,” Selby said.

But while business owners welcomed the mayor, others were less receptive.

One passerby, for no apparent reason, knocked an AP photographer to the ground, bloodying his face.

“As you can see, the mayor pulled up and somebody socked the news camera. That's the energy in the hood. We don't like him, we don't like the cops,” Jones said.

That perspective is part of what the mayor said the city needs to hear, and he expects the protests that have grown from it to continue.

“I think people have every right to express their views as long and as loud as they want, as long as they're not destroying or hurting anybody,” Kenney said.

The mayor and commissioner noted a more peaceful tone to the protests but said the National Guard and looting teams will stay in place.

City Council is planning its own response with what it's calling a "new normal" budget act, appropriating an initial $25 million to address racial disparities in housing, health care and jobs.

And in Harrisburg, Pennsylvania Gov. Tom Wolf announced he's taking action to address law enforcement reform and accountability across the state, with plans that include a thorough review and revision of use of force training and standardized testing, as well as best practices for verbal de-escalation methods.

The governor said the actions are based mainly on President Obama's Task Force on 21st Century Policing that was created in 2015 in the wake of Michael Brown's death in Ferguson, Missouri.