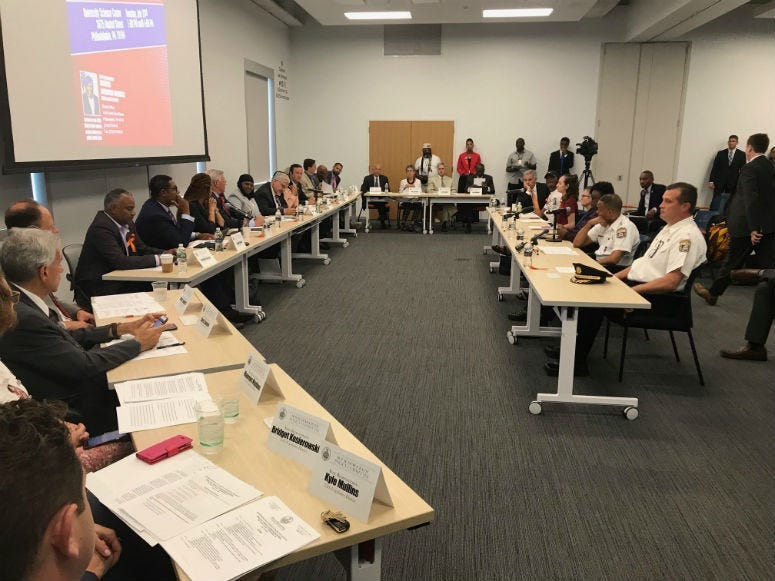 PHILADELPHIA (KYW Newsradio) — Roughly two dozen lawmakers from across Pennsylvania gathered in University City Tuesday for a hearing on gun violence, where elected officials looked at causes and impact but also asked for solutions.

The lawmakers hailed from all over the state: Lawrence County, Lackawanna County, Centre County, Mercer County, Monroe County, Allegheny County and beyond.

"This is - a...I gotta tell you, this is a record attendance," said one lawmaker to applause from the audience.

The hearing was organized and hosted by Rep. Movita Johnson-Harrell, who represents parts of West Philadelphia. A victim of gun violence, she is founder of the CHARLES Foundation, named after her slain son, Charles Johnson.

He was murdered 11 years ago in a case of mistaken identity.

"I candidly thought I was going to show up and see Rep. Movita Johnson here alone or with two other people," said Police Commissioner Richard Ross. "But with folks from as far away as Pittsburgh, what that suggests to me is that they got together and they recognized the gravity of the situation and want to help."

Nearly 2 dozen pa lawmakers are in philadelphia to hear testimony on impact of gun violence. So far @Krasner4DA @PhillyPolice commish, head of office of violence prevention and others testified. @KYWNewsradio pic.twitter.com/SCKaSKkKq6

Ross testified on a panel that included top city officials like Vanessa Garrett-Harley of the city's Office of Violence Prevention.

Each panelist discussed the many issues that lead to gun violence, the impact and what state resources could be provided by the state to help local officials deal with the aftermath of the public health crisis.

One request from Ross: pass tougher laws regarding stolen guns.

"It's not a week that goes by that I do not get a call about guns stolen from cars, and those are the ones that are reported." he told the lawmakers. "That's the biggest issue for us."

Philadelphia District Attorney Larry Krasner asked lawmakers to deal with the issue of ghost guns — firearms made mostly of plastic.

He wants them banned.

"We are not just seeing it happen, we are seeing those guns used in killings," Krasner said. "It is beyond me."

"I don't think I would have been in this position, had I not lost my brother," Johnson-Harrell's son and CHARLES Foundation co-founder Donte Johnson testified.

He told lawmakers that both he and his brother owned guns but rarely used them.

"To try to curb younger people, a lot of them have to be tired of it. They have to come to a point in their life where they are like, it's enough," he said. "Unfortunately, a lot of these young men have not come to that."

Johnson said at the CHARLES Foundation, they work to provide healthy alternatives to gun violence by reaching out to kids at a young age and by providing access to opportunities.

Shira Goodman of CeaseFirePA and Temple University Hospital director of trauma Dr. Amy Goldberg were among those who testified.

"Today's testifiers provided a lot of very useful insight for tackling the gun violence problem in Philadelphia and I'm thankful for their input," Johnson-Harrell said. "When we have open dialogue about the causes and drivers of these issues, we can better craft solutions that will ensure safer streets for our families. In the city, gun violence is on the rise and it's reaching a boiling point. We need to make sure that local officials and community organizers are fully educated and equipped to solve this problem."

The meeting was one in a series held across the state.