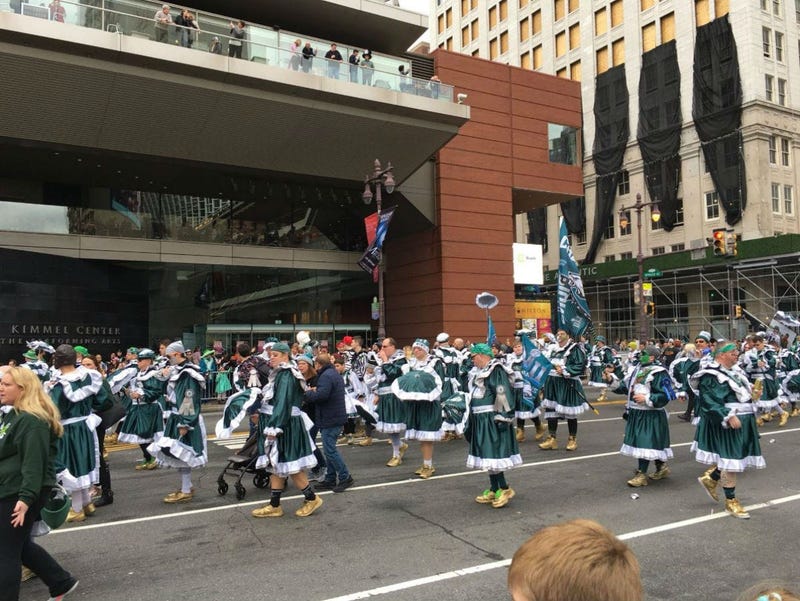 PHILADELPHIA (KYW Newsradio) — The Mummers brigade falsely accused of using blackface during a satirical skit that poked fun at Mayor Jim Kenney, which was based on a cartoon that received little backlash, is speaking out and they want a public apology.

The cartoon featured an image of Jay-Z walking Mayor Jim Kenney on a leash like a puppy. It was published last summer, taking a swat at the Mayor after he caved to pressure following his announcement that the Made in America concert would not be held on the Ben Franklin Parkway.

"I think there was some reaction, but it wasn't anything like this," said Signe Wilkinson, an editorial cartoonist with the Philadelphia Inquirer. She created the cartoon, which she forgot about, until the Finnegan New Year's Brigade decided to do a parody for the Mummer's parade.

Reporter: "No one cried racism when they saw your cartoon?"

But when Finnegan did the skit on New Year's Day, video of the performance and photos were shared on social media with activists with community leaders taking issue. Initially, those who saw the images believed the Jay-Z character was played by a non-black actor in blackface.

Activists called the image racist. Council President Darrell Clarke issued a statement on Wednesday characterizing the performance as being in blackface and denounced it.

"It's funny how if someone says something is racist, it colors how people look at something," said Wilkinson.

Many members of the community believed the characterizations, in large part because of the history of the Mummers, which include blackface and other racially insensitive images. But as it turns out, the actor was Darrel Young, a black man, who says he has been a member of Finnegan for two years.

"It's totally blown out of proportion. We were completely jabbing the mayor," said Michael Inemer, captain of Finnegan. "It's Darrell Clarke that started a lot of this, for no reason, without checking facts first."

Inemer says the group submitted their plans for the skit to the city. He claims it was approved as long as the Jay-Z character was played by an African-American. Finnegan, which Inemer says has two African-American members, followed instructions.

"They wanted us to be more diversified so we bring in guys into our club from all nationalities and it's still not right," he said, "I just don't understand."

Young wrote a letter to the Philadelphia Inquirer Wednesday outing himself as "black, American male mummer" who has been a member of Finnegan for two years. In his letter, he also blamed knee jerk reaction.

"Now, City Council President Darrell Clarke issued a press release that says that our skit 'brought shame and embarrassment to the City of Philadelphia' and that our skit involved a 'blackface Jay—Z walking a long-nosed Mayor Kenney like a dog.' Mr. Clarke claimed that our good-natured skit 'was offensive, racist and not even a little bit amusing.' None of that is true. Here? We portrayed a prominent black celebrity treating the mayor as his lap dog," the letter read.

Finnegan took heat in 2016 for a skit about Caitlyn Jenner. City officials called it transphobic and it became another black eye for the Mummers.

But Inemer says this year, they tried to do it right by getting approval and by using a black member (without black face) to act out the skit.

"As long as it's done in the correct way, and not with disrespect, it's all good," he said.

Councilman Clarke issued a revised statement after it was discovered blackface was not used, saying the skit was still disrespectful given the history of the club and of the Mummers.

"Whatever the truth is of yesterday's performance, if the individual portraying Jay-Z is in fact a member of this brigade, for instance, people of color know minstrelsy when we see it," he said in a statement. "This event and related organizations undoubtedly have much more work to do to make all Philadelphians feel welcomed and included in this annual New Year's Day celebration."

When a journalist asks if your black boss owes a racist organization an apology pic.twitter.com/1aJNEupOHH

Clarke's office declined to comment on whether he will provide a public apology.