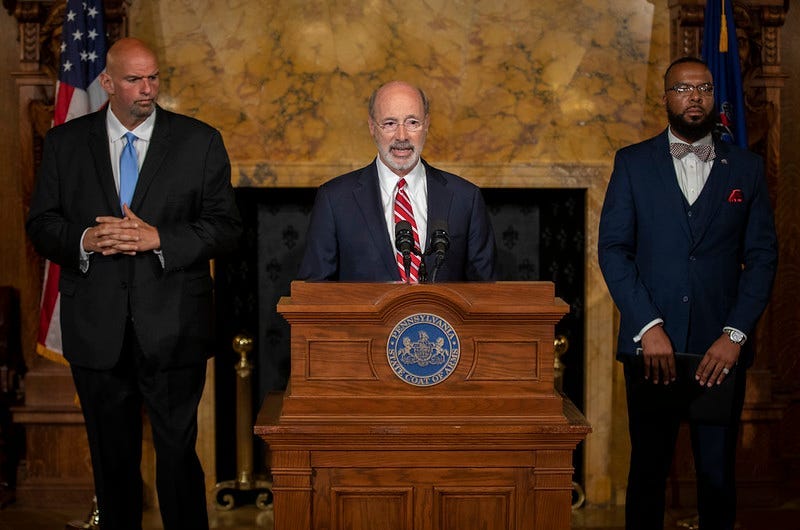 The new program run by the Pennsylvania Board of Pardons will allow individuals with minor marijuana convictions, such as possession of small amounts for personal use or sale and even felony possession, apply for a pardon via expedited process.

"It's the right thing to do, but it's also the smart thing to do," said Wolf, who made the announcement alongside Lt. Gov. John Fetterman and Board of Pardons Secretary Brandon Flood.

Wolf recently called for legalization of recreational marijuana in Pennsylvania, but noted that it would take time for the General Assembly to come up with a plan.

In the meantime, he wanted to use the executive branch to provide relief to the thousands arrested across the Commonwealth each year for marijuana possession and to help them avoid some of the collateral consequences of such convictions.

"This will allow people who have been convicted and have paid their debt to society finally move on with their lives," said Wolf, who noted that marijuana convictions can be a barrier to jobs and housing.

Flood says the expedited process that his office is implementing is expected to cut wait time for a pardons hearing from 2 1/2 years to less than a year, but he stressed it will still include a high level of review.

"There are no guarantees," said Flood. "We still have five board members who can vote favorably or deny an application."

Fetterman says the Board of Pardons has also eliminated pardon applications fees to make the process more accessible.

"It doesn't cost anybody anything," said Fetterman, who recently completed a statewide marijuana listening tour. "The only thing you have to lose is potentially your record."