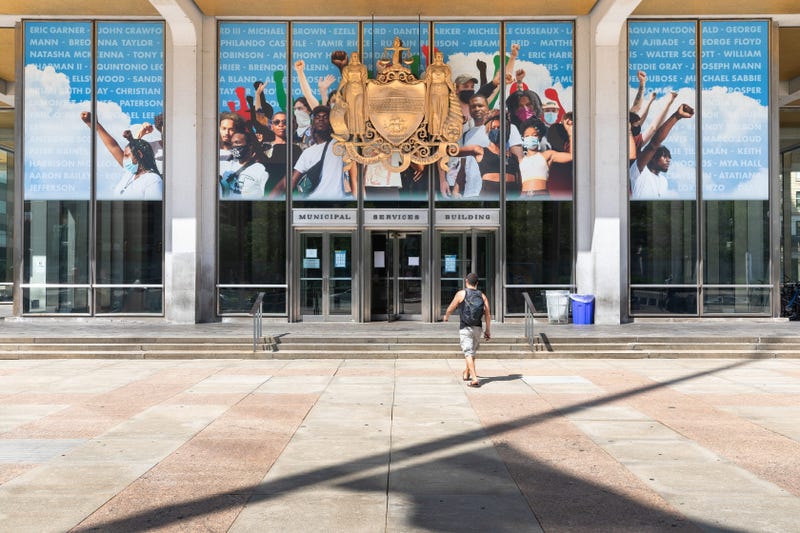 PHILADELPHIA (KYW Newsradio) — Mural Arts Philadelphia unveiled a new mural this week on the Municipal Services Building, just a few dozen feet from where protesters stood calling for the removal of the Frank Rizzo statue.

The colorful protest mural was done in reflective paint, and at 100 feet wide and 25 feet tall, it dons the northwest windows of the Municipal Services Building. It depicts protesters of all races, some holding fists in the air in defiance, covered by the relief of the city's seal.

"The fact that this site is 50 feet from where the Rizzo statue stood, gives it all the more power," said Jane Golden, executive director of Mural Arts. She said after "Black Lives Matter" was painted near the White House in Washington D.C., they wanted to do something similar, Philadelphia-style.

"During the day you get one view, at night you get another view and when you’re inside the MSB there’s yet another view," she said. "It’s really unique."

"I put them into a formation like a crown, because corona means crown in Latin," explained Russell Craig, the artist who designed the mural. He titled it "Crown." It reimagines the Eugene Delacroix neoclassical piece "Liberty Leading the People."

Craig said it’s a reminder of the COVID-19 pandemic and civil unrest that gripped the nation following the death of George Floyd.

"This was like a historical moment. It brought out fear," he recounted. "During the quarantine, it gave people the idea of what it was like to be in prison and it drove us all out because of frustration to scream out, 'Black Lives Matter.'"

"Crown" is just the first part of a three-part mural project at that site.