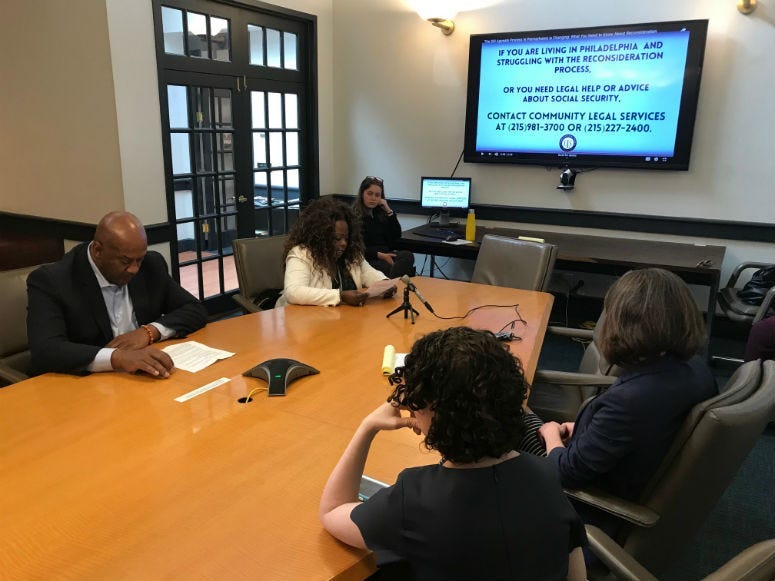 PHILADELPHIA (KYW Newsradio) -- Changes to the process for applying for Social Security disability benefits went into effect in Pennsylvania on Saturday. Applicants now have a new step in an already long process.

"This is a very harmful act," said Congressman Dwight Evans. "This is just a wrongheaded policy."

That policy is a change in the Social Security Administration's process for getting disability benefits. Instead of allowing applicants to apply, and if denied, seek a hearing before a judge, there's a reconsideration step inserted in the process. CLS attorney Jennifer Burdick says it means applicants must get two denials before a hearing.

"Most people who get benefits get benefits after they've met a judge who was able to really put all the pieces together," she said, "since problems that result in disabilities can often be complicated.

Burdick says the administration has 100 days to reject an applicant through reconsideration.

Aaliyah Phillips has a 5-year-old son who has learning and physical disabilities after suffering a stroke as an infant.

"[He needs> speech therapy, occupation therapy," Phillips explained...."I've been waiting a while. I'm overwhelmed and it's hard."

Tomorrow on @KYWNewsradio I’ll explain a change in the process for seeking @SocialSecurity disability benefits. This mom has been waiting for help for her 5yo son. #Reconsideration #DisabilityRights #SSI @RepDwightEvans @CLSphila pic.twitter.com/0B4JBvgPuh

CLS is helping her through the process, but reconsideration adds an additional six months to a process that can already takes about two years because of Philadelphia backlog.

The Trump administration has said the changes will mean some people can get benefits sooner. Burdick believes more applicants could get frustrated and give up.

"We will be looking at how [the change> affects real people," Evans said. "We will get documentation to prove that, in my view, this is a failed policy."