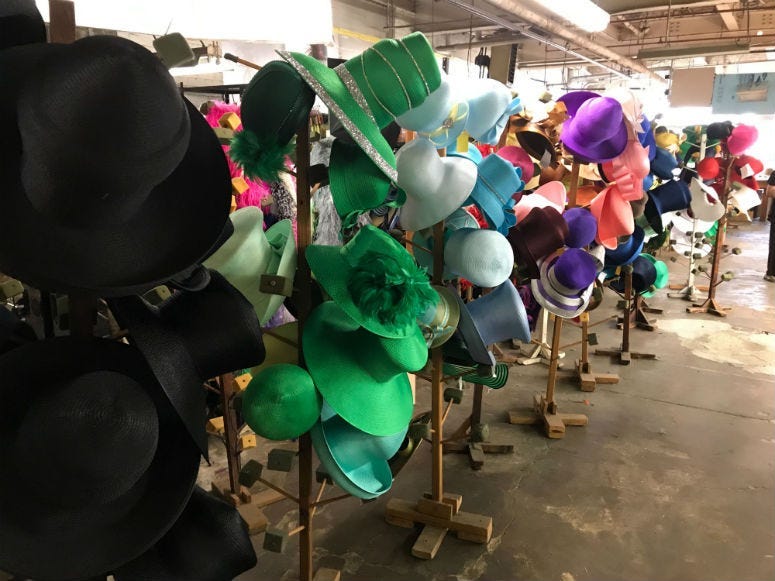 PHILADELPHIA (KYW Newsradio) — A Northeast Philadelphia factory that's bringing the traditional art of hat making into the 21st century will be part of Philly Fashion Week, which kicked off this week.

The crowns at American Hats LLC range from plain and petite to big and bodacious.

"All of our trims are hand done," said Rev. Georgette Morgan-Thomas, who owns the factory on Farley Street.

Morgan-Thomas lives in New York City and when she retired a few years ago, decided to do something fun.

"I love hats. So for me, being here is like being in the candy store," she said.

So she bought the nearly 90-year-old hat factory and runs it with her son Robert.

"We bought it," she said. "I had always been talking about how we need to make things in America and all I could think about is, here goes some more jobs."

In 2016, after purchasing it on the brink of closure, they restructured it, breathing new life into the business after years of struggle. The factory employs 10 people who stick, nip, tuck and literally bake at least 100 hats by hand every week.

"Our hats are really couture because almost every hat is different," said Morgan-Thomas. "That's why they cost more, because they are not the same. Part of it is me, because I don't want to see someone with the same hat I have on."

Last week, American Hats opened up a boutique in the Fashion District and this week, they'll take part in Fashion Week.

For Morgan-Thomas who wants to open up more factories, this is just the beginning.

"My vision is that this would be a place where we can teach children, or anyone who seriously wants to learn, how to make hats, so this can be an art for them," she said. "We want to be in more boutiques, but we need the support of the American people."

"The hat that Cecily Tyson wore at Aretha Franklin’s funeral was originally made here," Morgan-Thomas said.

She also pointed to a remake of a hat Beyoncé wore to the Grammy's.

"We tried to recreate the shape."

Now in her 70s, Morgan-Thomas said she is hoping to use the factory to make America great.

"I want to show the world that America still make things, and we can make beautiful hats right here in Philadelphia," she added.