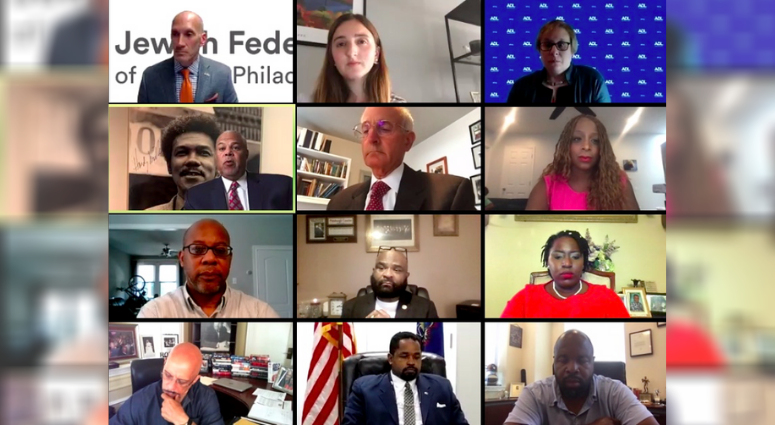 PHILADELPHIA (KYW Newsradio) — Members of the Philadelphia NAACP have voiced frustration over their president, Rodney Muhammad, after he shared an anti-Semitic meme on Facebook. No one within the organization has called for his resignation, but leaders outside of it are.

John Jordan, a longtime member and former leader of the Philadelphia NAACP, said many members are disappointed that their leader is under fire at such a critical time.

“We are just surprised that he got caught up in something like this,” he said, “given how intelligent Rodney is and how well-versed Rodney is.”

On July 23, Muhammad shared an image of Eagles player DeSean Jackson, rapper Ice Cube, and popular TV host Nick Cannon, who were each recently called out for their own anti-Semitic posts. In the image Muhammad shared, the three men were placed above a quote misattributed to the philosopher Francois Voltaire and an anti-Semitic caricature.

On Monday, he issued a statement via the NAACP’s national website, saying he learned the image had been used by white supremacist groups. He wrote, “It was never my intention to offend anyone or cause any hurt.”

Other city leaders were not impressed.

“I read his statement several times, and the words ‘I’ and ‘sorry’ are not in there,” said Steven Rosenberg, CEO of the Jewish Federation of Greater Philadelphia, which has condemned the post and called for Muhammad’s resignation.

Since the Jewish Federation first called Muhammad out on July 24, Mayor Jim Kenney, members of Philadelphia City Council, and other elected officials leaders have followed suit.

“He needs to apologize, then step aside to allow progress to move forward,” said state Sen. Anthony H. Williams.

Williams was outraged over Muhammad’s post, and he said it undermines the NAACP’s effectiveness at a critical time.

Regardless of someone suggesting that they do not understand the history or context, the image of a hand on top of Black people during this time is grossly insensitive to the backdrop of the fight for social justice.

“Last year, he called for police officers to be fired for the exact same thing — that is, making racist, offensive posts on Facebook,” Williams noted.

“I wouldn’t ask him to resign for something like that,” countered Harold James, an executive board member of the Philadelphia NAACP.

“I don’t think he needs to apologize,” James continued. “He didn’t know what it represented.”

James said he supports Muhammad’s desire to speak out on behalf of Jackson and other Black public figures in the hot seat, which was the original intent of the post.

”We are certainly not an anti-Semitic organization, and we disavow anything that is anti-Semitic,” said Rev J. Louis Felton, a pastor who is also serving as the Philadelphia NAACP’s first vice president.

The Philadelphia NAACP has held its annual fundraiser at the National Museum of American Jewish History for the last couple of years, Felton noted, and the group deeply cherishes working with the Jewish community.

“But our president is of age, and I will have to allow him to speak for himself,” added Felton, who would serve as interim president if Muhammad were to step aside, before NAACP elections this fall.

Felton expects Muhammad to call an executive board meeting this week to discuss the next steps.

Multiple NAACP chapters have condemned Muhammad’s post, and the NAACP Pennsylvania State Conference has taken the lead. State President Kenneth Huston said his hands are tied, and it will be up to the NAACP executive board. If they do not vote Muhammad out, it would be up to the national NAACP. The national group has yet to comment.

“The idea that a civil rights leader would not just share an anti-Semitic message, but then refuse to accept responsibility for it and apologize … is extremely disappointing to me,” said Gauthier.

The group also noted that Mosque No. 12, a North Philadelphia-based Nation of Islam mosque run by Muhammad, also shared an anti-Semitic post this week.

The Nation of Islam is considered a hate group by the Southern Poverty Law Center for its “theology of innate Black superiority over whites and the deeply racist, antisemitic and anti-LGBT rhetoric of its leaders,” like Nation of Islam head Louis Farrakhan.