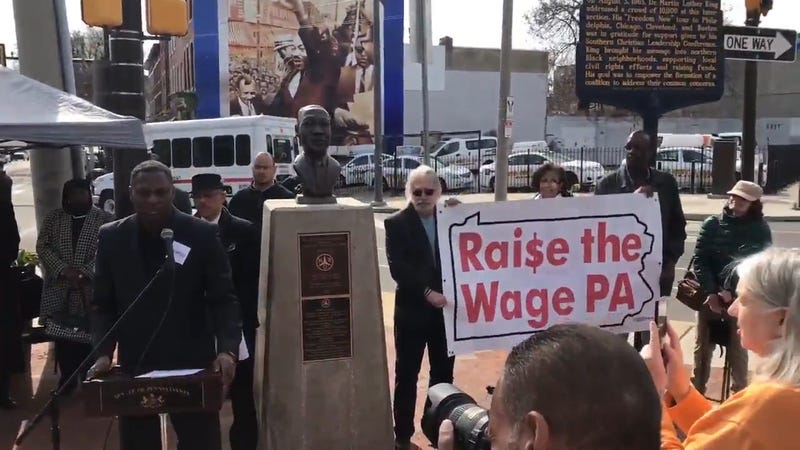 WEST PHILADELPHIA (KYW Newsradio) — Pennsylvania Senate Democrats gathered at the corner of 40th Street and Haverford Avenue Thursday to kick off a 30-day effort to focus on poverty in Pennsylvania.

They stood at the same place where Dr. Martin Luther King, Jr. spoke to 10,000 Philadelphians in August 1965 as part of his Freedom Now tour — and on the 51st anniversary of the day he was assassinated in Memphis in 1968.

"We must stand up and not look at, but call to action on the issues of social change," said state Sen. Vincent Hughes (D-Philadelphia/Montgomery), noting economic justice is an extension of King's work.

Call to action by @PaSenateDems kicks off today across commonwealth to deal with #poverty on 51st anniversary of #DrMartinLutherKingJr assassination. More on @KYWNewsradio @SenatorHughes pic.twitter.com/hj8oXEUFtT

The renewed focus begins with rallies in Pittsburgh, Reading and Scranton, followed by meeting with impoverished families who can express their plight to those in power, who can in turn suggest solutions to issues like housing, child care, education and jobs.

"Lifting up focus and attention on this act of poverty and economic insecurity," Hughes added. "The number of people in poverty in Pennsylvania is 1.5 million people."

The statewide call to action will to examine 30 issues related to poverty and economic security that Senate Dems are working on this legislative session.

"I'm here to say one fair wage for every citizen of this state," said Rev. Gregory Holston, executive director of POWER, the group that is working to raise the minimum wage in Pennsylvania to $15.

Pa lawmakers will travel the state and do a listening tour re #poverty. But #RaiseTheWagePa is a large part of strategy. Housing, blight and more are part of agenda. More on @KYWNewsradio @powerinterfaith pic.twitter.com/foXiqNPQBr

Advocates like John Myerson from the Raise the Wage PA coalition say higher pay is a necessary part of an anti-poverty strategy.

"We want cash in people's pockets so they can be spending it in businesses and putting people to work," he explained.

"We have people every day who are losing their homes," added Andrea Custis, president and CEO of the Urban League of Philadelphia.

She said a lack of affordable housing, unemployment, and the high cost of child care and health insurance keep people in poverty. "The fight that we had going on today is the same fight that King had 50 years ago."

Democratic lawmakers hope to bridge a bipartisan coalition to tackle poverty in Pennsylvania.