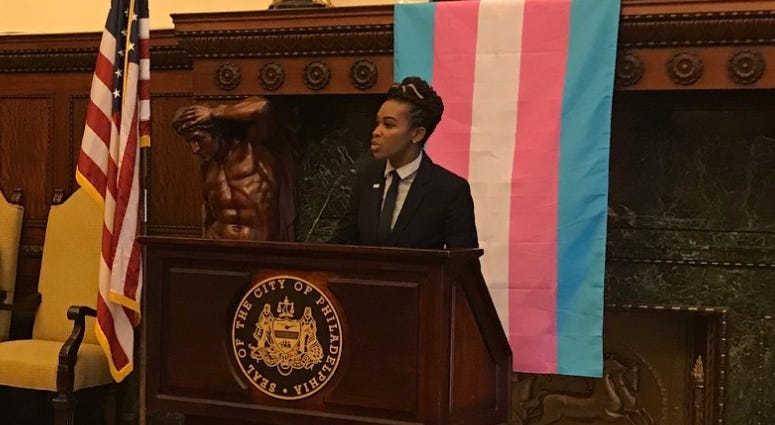 PHILADELPHIA (KYW Newsradio) — The Philadelphia Police Department announced a new policy Tuesday that will guide interactions with transgender and non-binary individuals while in police custody.

During a press conference at City Hall, city officials explained the new Directive 4.15, which requires police to record a person's chosen name on all paperwork, and orders officers to use a person's chosen pronouns regardless of what's listed on their ID.

The policy also allows transgender and non-binary individuals, who are being arrested, housed and searched, to choose the gender of the officer conducting their search, unless it would compromise the safety of others.

And when possible, officers are required to house and transport transgender people separately from other incarcerated people.

Officials are calling it one of the most progressive policies in the country.

Today @AmberHikes and the PPD introduced the monumental new policy regarding police interactions with trans and non-binary individuals! Thank you to everyone who was instrumental to this policy reform, especially the trans & non-binary Philadelphians who helped us in the process pic.twitter.com/66vTW7bu4r

"This policy is monumental. It is historic," said Amber Hikes, executive director of the Mayor's Office of LGBT Affairs. "Gender is incredibly nuanced and complicated, and just because a person is a trans woman does not mean they want to be searched by a cis woman."

She said the new directive mends the 2013 version, which outlined derogatory terms used to refer to transgender people.

"There were things in that directive that were, frankly, at this point, kind of insulting and degrading," noted Deputy Commissioner Joe Sullivan.

The transgender community took part in drafting the new policy, alongside the Philadelphia Gay Officers Action League, the LGBT Liaison Committee and other groups.

Transgender activist Deja Alvarez said she experienced decades of bias and abuse from police, but she's proud to be a contributing part of the policy changes, "to make sure that the LGBT — especially the T communities — are protected."

Officers are being trained on the new guideline, which is effective immediately.