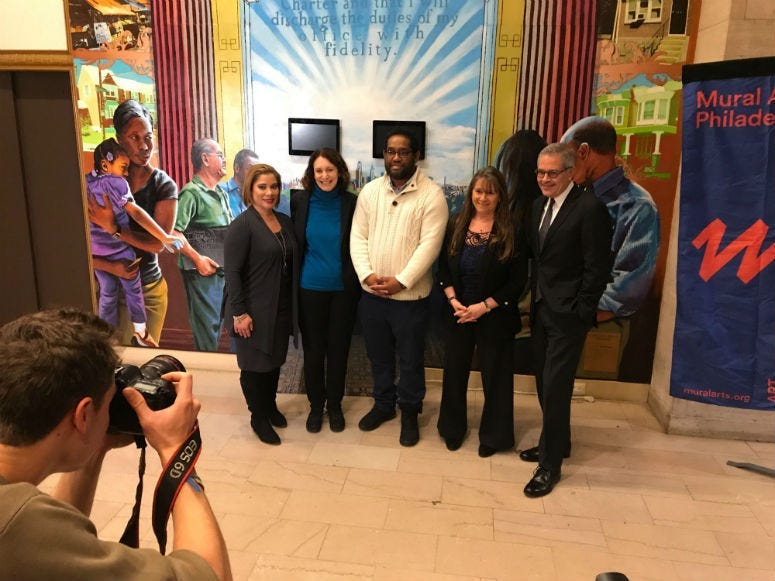 PHILADELPHIA (KYW Newsradio) — The Philadelphia District Attorney's Office introduced its first-ever artist-in-residence Thursday. The accomplished visual artist is a former juvenile lifer who honed his skills behind the wall.

James "Yaya" Hough was just 17 when he was sentenced to life behind bars. Earlier this year — after 27 years — he emerged transformed at age 45 when he was released from prison.

"My imprisonment was effective, just, but the same time, redemptive," said Hough. "During my time in prison, there were many, many opportunities for an individual to grow, and Mural Arts was a big part of it."

"It was one of those formative experiences that brought me to this moment," he said.

Now, Hough will create public art in collaboration with Mural Arts, Fair and Just Prosecution, and the Philadelphia DA's Office as its first-ever artist-in-residence.

"I not only want to provoke people because I want to talk about the issues that really affect people in a deep and serious way, but I also want to inspire people," he said.

District Attorney Larry Krasner said the finished result will not be propagandist  — it will be Hough's own effort.

"He's here as an artist, heaven knows what, but he'll do something that only art will do," Krasner said, noting that art has not only transformed the city of Philadelphia, but many who are incarcerated.

The first @philadao #ArtistInResidence is announced. James “YaYa” Hough is a former #juvenilelifer who honed his skills behind the wall thanks to @muralarts. More on @KYWNewsradio on how this will work and what will be produced. #ArtforJustice pic.twitter.com/TYySnXWnJJ

"Art helps us understand who the system of justice works," said Jane Golden, executive director of Mural Arts Philadelphia. "It can be a bridge between the public and the district attorney's office."

"I'm eternally saddened by this," Hough said of his life sentence for murder. "It is a tragedy for anyone to lose their life. Since then, I tried to live a life that is purposeful and meaningful and honors that individual's life."

Hough said the work that he does is part of the price for his past wrong.

"It's a life debt that I will continue to pay until my life expires," he said.

Organizers and founders of the project hope the four-month program will become a model for other prosecutors nationwide.